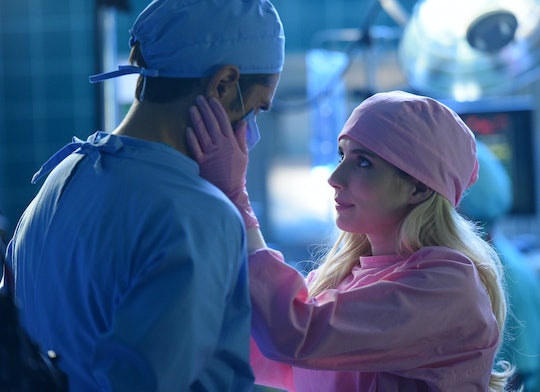 Who Is The New Red Devil? The 'Scream Queens Season 2 Finale Resurrected An Old Enemy

When the season finale of Scream Queens was ending, it looked like the Chanels had finally gotten everything they'd ever wanted. Chanel became a TV doctor. Number Three was her executive producer. and Number Five turned into an actual doctor. But not all is well. Who is the new Red Devil on Scream Queens? The Season 2 finale resurrected an old enemy, and it's not looking good for Chanel Oberlin. After a successful day of giving bad medical advice on television, Chanel went back to her car with a vanity plate bragging that she's rich again, and found a little Kappa box on the dashboard. This then led to the biggest surprise of all: the Red Devil was shown hiding in her back seat.

Obviously, it's too early to tell if Chanel will ever make it out of that car alive. In the first season, the Red Devils were pretty committed to killing all of the sorority sisters, and somehow Chanel and just two of her minions managed to make it out unscathed. If Chanel is to be believed, it's because she's young and pretty and fashionable. After all, that's what she's working with and she's still alive. So it must be true. Or something?

The bigger question here, though, is who is reprising the Red Devil costume for more serial killing? The one person we can rule out right away is Hester, because she is currently sipping mai tais and murdering shipwrecked tourists on Blood Island with Dr. Brock Holt, which was her eventual plan all along. That leaves us with just a few options. It could be Zayday, but when we last checked up on her, she's basically running the C.U.R.E Institute with Chanel Number Five and it doesn't seem like she's holding any grudges at the moment. Grace, however, hasn't been seen in quite some time.

Her hot dad, Wes, appeared in Season 2 as one of three Green Meanies, bent on exterminating the Chanels for what they did to her. Apparently, all the trauma of that year put Grace into a mental institution. She doesn't even wear hats anymore. And an unhinged Grace with a dead father and a lot of righteous anger against Chanel Oberlin seems like the perfect recipe for a Red Devil return. Of course, if the show gets picked up for a third season, you can be sure that she'll have recruited some help, because that is just what serial killers do in this universe. We'll just have to wait and see I guess!