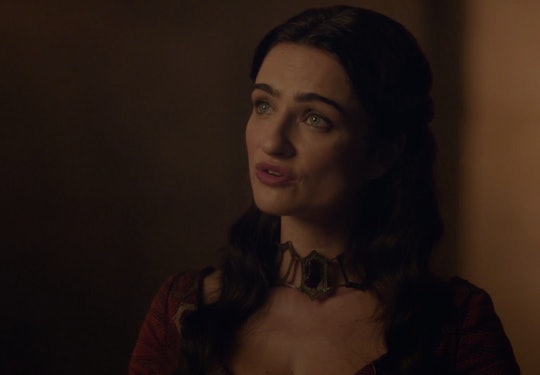 Who Is The New Red Woman On 'Game Of Thrones'? She May Have Plans For Tyrion

According to Refinery29, last summer an audition tape for season six of Game of Thrones leaked, revealing a new Red Priestess named Kinvara would be paying a visit to Tyrion and Varys in Meeren. Based on the early previews for this season of Game of Thrones and the preview for the next episode, it seems the leaks were in fact correct. "Knowledge has made you powerful, but there's still so much you don't know," Kinvara says to Tyrion and Varys in the preview.

In the preview Kinvara, played by Ania Bukstein, is wearing a necklace that looks very similar to the one that Melisandre, the OG Red Woman, always wears. We now know that Melisandre's necklace isn't just for decoration but actually hides her true age, putting everyone's contour skills to shame. It's possible then that Kinvara is just as old, if not older, than Melisandre so she may very well know things that Tyrion and Varys don't.

It's possible Kinvara knows the truth about Tyrion's parentage. Besides the R+L=J theory, one big theory is that Tyrion's father is actually King Aerys Targaryen, also known as the Mad King, which would explain why Tywin always hated Tyrion. Although Tywin was a terrible person in general so that could've also been part of it.

If Tyrion is indeed a Targaryen, it wouldn't be all that surprising for Kinvara to want to find him and help in some way. Similar to how it is believed Jon Snow is a Targaryen and how Melisandre believes he is the Prince That Was Promised, Kinvara may feel the same way about Tyrion if she does know, or suspect, he's a Targaryen. The Prince, or Warrior of Light, is said to be born from the House Targaryen, and even if Kinvara isn't there for Tyrion it's possible she's there for Daenerys.

Either way, it's doubtful Tyrion and Varys will be open to meeting with Kinvara. Both men aren't religious and it'll be difficult for Kinvara to convince them they should trust her or accept her help, if that's indeed what she's offering. Tyrion and Varys deal in plans and logic, not prophesies and magic. Unless Kinvara can prove her beliefs to them in some tangible way, it's unlikely they'll hear her out.

Maybe she'll take of her necklace and show the truth of her power. Or maybe Kinvara isn't there to help them at all. We'll just have to wait until next Sunday to see what role this new Red Woman will play on Game of Thrones.