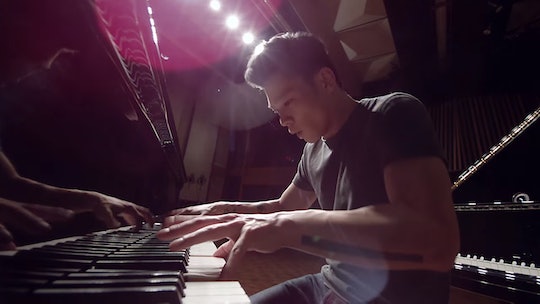 Who Is The Pianist In The Android Commercial? Ji-Yong Kim Is About To Be An International Sensation

I try to avoid watching commercials, but every now and then, one sneaks onto my screen. The latest, Android's "Monotone," made me sit up and take notice. In the commercial, a young, tattooed man sits at a grand piano and plays the third movement of Beethoven's "Moonlight Sonata" at lightning speed. I actually rewound the ad the first time I saw it and forced my husband to watch. "Look at his hands!" I screeched. "It looks like he's got eight fingers on each one!" It's truly remarkable to watch him play. So who is the famous Android pianist?

Luckily, inquiring minds alike have done a little digging and tracked down his identity. According to People, the pianist's name is Ji-Yong Kim — he's a huge deal in South Korea, and he's about to be a huge star everywhere.

In a 2014 interview with the Johns Hopkins University site Hub, Kim said that he's been playing the piano since he was five years old. His mother ran a music school where she taught "violin, piano, voice, the works." He moved to the U.S. when he was nine, and by age 10, he became the youngest pianist to win the New York Philharmonic's Young Artists Competition. He's been playing professionally since he was 11 years old.

Kim likened music to a second language and said that "when you're on stage, it's a home away from home. I get to express things I could never really express with words."

Kim also told Hub that while his focus is classical music, he also plays other genres, but does not perform them, and he admitted to practicing an astonishing five hours a day. In a behind the scenes video detailing how the Android ad was made, Kim shares that the ad's tagline, "Be together, not the same" aligns with his personal belief that "when we are in harmony and in unison, but we're all distinctly different, that's when magic happens." Check out the video for an extended look at his skills, or if Bach is more your thing, here he is in 2013:

Kim has performed with the Toronto Symphony, the Nashville Symphony, Bangor Symphony, Fairfax Symphony, New Haven Symphony, New Jersey Symphony, Santa Rosa Symphony and Charlotte Philharmonic. In 2010, he collaborated Korean pop-artist Tae Jung Kim to design a portable piano for outdoor "guerrilla" performances in an effort to make classical music more accessible to young people. He's also released two albums which are available on iTunes, but it looks like Android fans will just have to settle for YouTube videos for now.