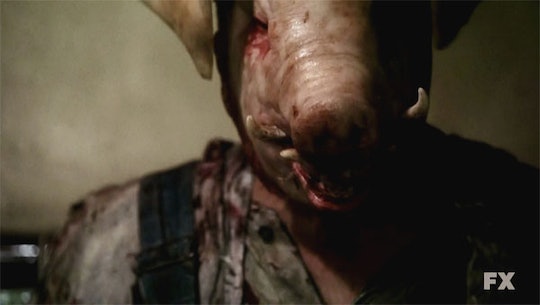 Who Is The Pig Man On 'AHS: Roanoke'? The Terrifying Creature Is Dangerous

American Horror Story: Roanoke has had no shortage of terrifying villains, despite having aired only four episodes so far. We've gotten up close and personal with the murder-happy "Butcher" (aka Thomasin White), a Roanoke colonist ghost who made a pact to sell her soul to Lady Gaga's mysterious character, who herself is some sort of supernatural creature of unknown origin. Beyond these two terrifying women, there's yet another monster that we know little about – the Pig Man. But who is the Pig Man on American Horror Story: Roanoke?

As of yet, we really only know two things for sure about the Pig Man: He's a ghost, and he's a dude with a pig's head on his head. The pig's head looks like it's just the head of a dead pig over his own, like a sort of macabre costume, but maybe the head was actually sown on to replace his own. This is, after all, the same American Horror Story that gave us the minotaur man, so I don't put anything past them when it comes to body horror.

We know that the Pig Man is a ghost because (1) we saw him being roasted alive in the woods by the Butcher on "Chapter 2" and (2) we also saw him take an axe to the chest, courtesy of Elias Cunningham, on "Chapter 4" – and yet he keeps on keepin' on.

Surprisingly, Elias survived the attack we'd seen earlier in the season on his video tape – which was lucky for the Millers, who benefited from Elias' quick axing of the Pig Man as he was attacking them. The Pig Man survived the axe wound, and Elias warned Shelby and Matt that the creature would return and attack them once again. Inexplicably (to both myself and hordes of incredulous AHS fans on Twitter), the Millers still didn't pack up and finally leave the house behind.

Elias then filled in the couple on a bit of backstory regarding the super-cursed house and its former inhabitants. Specifically, he clued them into the fact that, for decades, the house's inhabitants were being murdered – at or around the exact same time each year. One family in particular, the Chens, persisted in trying to call upon protection from their ancestors after being attacked by the Pig Man repeatedly, only to wind up brutally slaughtered by the Butcher and her people.

Later in the same episode, we also spotted the Pig Man frolicking with his fellow ghosts and Flora on the outskirts of the Roanoke house property. It was pretty horrifying, despite the fact that the Pig Man wasn't *actively* murdering people at that time.

Despite relatively little info about the history and nature of the Pig Man (like say, for example, how he came to have a PIG'S HEAD), there is one popular theory circulating about the creature – that he's actually the character played by Evan Peters this season.

Fans don't seem too pleased with this idea. But admittedly, it would be a hell of a twist if the Pig Man was suddenly "unmasked" and Evan Peters was underneath, having secretly been in the season the whole way through.

More Like This
'Hocus Pocus 2' Officially Has A Release Date To Look Forward To
Ed Sheeran Just Revealed He's A Dad Of Two With The Sweetest Instagram Announcement
Kate Middleton Explains Why Her Kids Couldn't Attend The Top Gun: Maverick Premiere
10 Ways ‘Workin' Moms’ Is Basically A Crash Course In Parenting