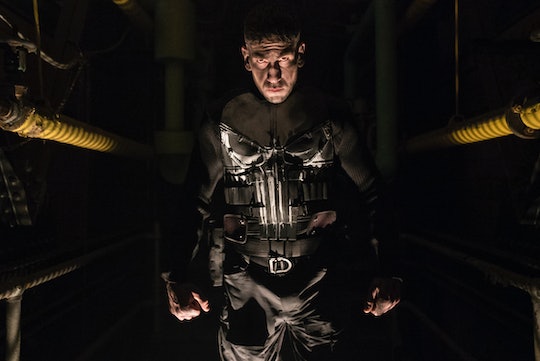 'The Punisher's Marvel Backstory Is Heartbreaking

If you'd skipped out on a few of Marvel's Netflix series, then it's most recent one might leave you lost. The Punisher revisits a character who had been introduced on Daredevil Season 2 first: a violent vigilante with a dark past named Frank Castle. But who is The Punisher really? What made him into the morally ambiguous serial killer he is today? Frank Castle's backstory has stayed the same no matter what medium it's being told in. Comics, movies, or TV, it doesn't matter — certain things don't change.

Frank is an antihero, though the line between hero and villain is blurrier for him than for most. In the comics, he started off as an antagonist for Spider-Man before moving over to Daredevil, eventually striking out on his own when the character became more popular. His actions are often hard to condone because Frank kills countless people based on little more than his personal code of right and wrong, but somehow audiences still end up rooting for him. There may be some vicarious enjoyment in watching him take out the bad guys with less of the moral posturing other heroes engage in, but his tortured past also plays a part. A conflicted, complicated protagonist with a tragic backstory is a siren call that's hard to resist.

In every variation, one traumatic incident sets off Frank Castle's transformation from family man to hardened killer. Frank's family is always killed and that always inspires his hatred for crime, organized or otherwise. Before they died, he was a sniper and a soldier, though the war changed; in the early days of the comics, he was a veteran of Vietnam, but on Daredevil he was coming off a tour in Iraq. His wife was named Maria, and they had two kids: Lisa and Frankie. He loved his family deeply, which was why what happened to them changed who he was so entirely.

The circumstances of their deaths have seen minor variations. In the comics, Frank's family was killed by the mob after witnessing a hit in Central Park. On Daredevil, it was revealed that Frank and his family were caught up in a shoot-out between three different gangs, all because of a drug lord named the Blacksmith. After his wife and kids died, vengeance became Frank's entire life. He tracked down everyone responsible for destroying his family and killed them, then moved on to other wrongdoers.

In the Marvel Netflix shows, Frank's past continued to play a part in his present even after he had taken out his family's killers. On Daredevil, Frank discovered that the Blacksmith was actually Frank's old commanding officer, Colonel Ray Schoonover. Schoonover had wanted Frank to get involved in his drug dealing, but Frank declined; this may have had some impact on the deaths of Frank's wife and children, which appeared to be largely accidental. Schoonover hinted at a deeper conspiracy, but was killed by Frank before the full truth could come out.

Frank's motivations are simple but the themes of his story are complex: revenge and righteousness, with a nihilistic twist that sets him apart from traditional heroes and makes him a perfect foil for them at the same time. Frank Castle was a normal man who underwent an intensely awful situation and emerged on the other side with a desire to punish others because his family was unfairly targeted. In a way, he's seeking justice and trying to right some of the wrongs that have been done in the world; that's part of what draws fans to him as a character. His actions are drastic but also strangely understandable. Anyone could sympathize with a character acting out because they're in pain.