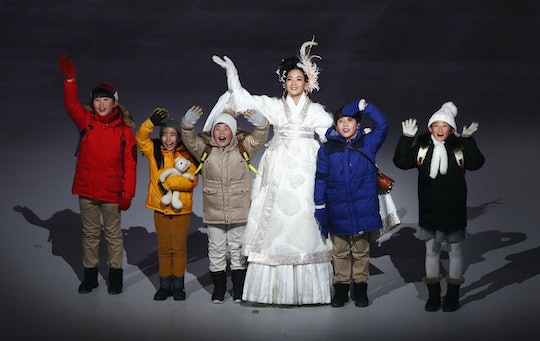 The 2018 PyeongChang Winter Olympics are officially under way and the opening ceremony kicked off with a beautiful display telling the origin myth of Korea before the delegation of South Korean Olympic champions carried out the country's flag. Then, the whole stadium stood for the national anthem, which was delivered by an extremely adorable and warmly bundled choir of kids. But some viewers may be wondering: who is the Rainbow Children's Choir? They're "a multicultural children's choir with members from ten different nationalities," according to The Telegraph.

Even though North and South Korea will be competing and marching together under a "unification flag" this year, the Taegukgi flag of South Korea was still carried out by eight former Olympians to kick off the opening ceremony. As it was hoisted, the Rainbow Children's Choir — which is made up of 75 children from multicultural families, hence "rainbow" — sang the national anthem "Aegukga." This roughly translates to "Patriotic Song" and the lyrics have a lot of nature imagery which actually paint a really beautiful picture of the Korean landscape. PyeongChang Olympic Stadium is in what ABC News calls a "sleepy mountain town," which the national anthem perfectly evokes. Hoenggye, the town where the stadium was erected, is located in the Gangwon province of Pyeongchang County.

The 2018 PyeongChang Winter Olympics opening ceremony was titled "Peace in Motion" and it was framed around the epic journey of five children from Gangwon. They represented the five Olympic rings and the five elements believed to make up the universe: earth, metal, fire, water, and wood. It was sort of like a really high concept mashup of Stranger Things and The Chronicles of Narnia, with the children traveling on the back of a white tiger — the mascot of these winter games — throughout the creation story of Korea. They traveled from a constellation in the sky to the formation of the Baekdu mountain range to a glittering gate, beyond which lay ~the future~. According to the Washington Post, this was meant to symbolize South Korea's shift from beautiful natural landscape to a global tech powerhouse. A short film featured a glimpse into a high-tech future, symbolizing the promise and innovation to come from today's South Korean children.

"When the children entered the future world, where everyone and everything are connected, they realized the significance of working together for peace," ABC News reported.

As the children "returned" to the present (and as the show returned to the arena), they shared light from candles they held with another family onstage. That family then shared their candlelight with other folks, and soon, 1,000 residents of the Gangwon province stood onstage holding lit candles, forming the shape of a dove. The 35,000 spectators held candles, too.

According to The Washington Post, "candles have come to symbolize the power of the people and of democracy in South Korea," partially because of the candlelight vigils held by South Koreans to protest their former president, who was eventually impeached.

As the PyeongChang Olympic Stadium was illuminated by candlelight, four South Korean music artists banded together to sing a rendition of John Lennon's "Imagine," according to The Mirror, as video streamed of 27 street artists from around the world performing the song. "Imagine," as sung by folk singer Jeon In-kwon, indie rock singer Ha Hyun-woo, K-pop singer Ahn Ji-young, and singer Lee Eun, was the only other live musical performance in the opening ceremony alongside the Rainbow Children's Choir and their performance of the national anthem.