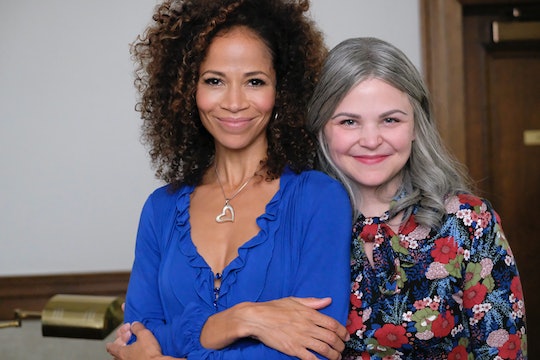 Consider This Your Warning: Grab All The Tissues For 'I Am Somebody's Child'

If you haven't cried enough this week, prepare to meet that quota with Lifetime's release of I Am Somebody's Child. This is different than some of their made-for-TV movies, which often pull from the headlines, because it's a story so unique you likely haven't heard it told in this particular way before. Based on true events — adapted from Regina Louise's 2003 memoir, Somebody's Someone — you'll want Regina's fictional, adoptive mom to be your mom, too. Fiction is great, but who is the real Jeanne in I Am Somebody's Child? I'm serious when I say, please round up the tissues before reading any further. You've been warned.

The real Jeanne — Jeanne Kerr-Taylor — is the woman who adopted Regina Louise. Her Linkedin profile lists her as a resident of San Francisco — the same county in which she and Louise first met — and she's currently an Administrative Analyst "inspiring, educating, and coaching computer users." The '68 graduate from Sacramento State College with a double major (Bachelor of Arts, Psychology, and Nursing) also volunteers for White Pony Express, which provides free food and clothing to those in need. Basically, the woman has a heart of gold, and that's only the beginning.

The real Jeanne's story, which Lifetime depicts in I Am Somebody's Child, began when Louise was abandoned by her mother as a toddler, then, years later, by her musician father, Tom Brock. She surrendered herself to state custody on the eve of her 13th birthday. What happened thereafter is a travesty to the well-being of any child: Louise bounced through over 30 different foster homes and psychiatric facilities before she aged-out at 18. Throughout those turbulent years in the system, she connected with one social worker in 1977 when Louise was 15-years-old. It was Kerr-Taylor, who attempted the adoption then, but her petition was denied because Kerr-Taylor was white, and Louise was not.

In a raw essay penned by Louise on the website Narratively, she explained, "1972 inaugural convening of the National Association of Black Social Workers had issued a position statement against transracial adoption," she said. "According to them, as a black person, I needed to cultivate 'the necessity of self-determination from birth to death'. Apparently, a white woman loving a black girl was tantamount to genocide." This could've been the end of the story. Do you have those tissues ready?

You'd think that would've been the end of both women's journeys, but fate had other plans in store for both. Though they went their separate ways — Kerr-Taylor moving, marrying, and having a child, while Louise had a child and became a nationally renown author and motivational speaker — neither gave up on reuniting at some point.

According to Chicago Tribune, "The woman took Louise to the ballet and opera, taught her to believe in herself, and made her a beautiful blue dress with rainbows and hearts stitched on the front," and then disappeared. That is, until editors for Louise's memoir asked for corroboration, which led to the request of Louise's file from social services, then to the discovery of letters Taylor-Kerr had written to Louise — that Louise never received.

Fast forward to Louise as a successful author and speaker. A former co-worker tracked down Kerr-Taylor, who then emailed Louise through her website, and waited for Louise's call. She did call. And when that call happened, the two made plans to reunite — and for Kerr-Taylor to officially adopt Louise. Finally, Nov. 20, 2003, Taylor, 59, adopted Louise, 41 in the same Contra Costa County courthouse that denied them all the years before.

Whether you can relate to Louise's incredible story or not, the real Jeanne is someone to aspire to and I Am Somebody's Child is the perfect snapshot of their story. It just goes to show, it ain't over, 'til it's over.

More Like This
All The Nights Hocus Pocus Airs On TV In October 2022
Kim Kardashian Stars In Hilarious House Of The Dragon Parody, The Targashians
Lifelong Teacher Dr. Jill Biden Loves Watching Abbott Elementary Too
10 Parenting Lessons From Abbott Elementary That You'll Want To Write Down