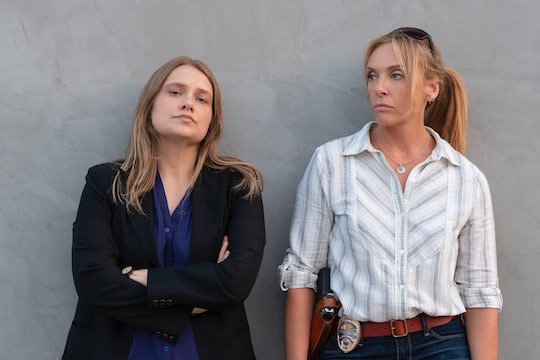 Netflix's Unbelievable is based on the true story of an 18-year-old girl who was raped in her apartment by an intruder. In the series, Detective Karen Duvall (Meritt Wever) works with Detective Grace Rasmussen (Toni Collette) to track down the rapist. And in real life there were two female officers who were integral in solving the case: Detective Stacy Galbraith and Sergeant Edna Hendershot. But who is the real Karen Duvall from Unbelievable?

It seems like Wever might be based on Detective Stacy Galbraith, though it's always possible that the character wasn't wholly based on one single person. The changed names do allow for some leeway when it comes to fictionalizing the characters. But Wever's Karen plays much the same role Galbraith played in real life.

When Washington state native Marie (Kaitlyn Dever) reports her assault to the police in Unbelievable, they doubt her. She seems too calm. The details don't add up. They think she's made the story up for attention, and are so convinced that they charge her with filing a false report. However, miles away in Colorado, Karen takes a statement from a rape victim named Amber (Danielle Macdonald) with much more care. Amber's story sounds very similar to Marie's, but it takes some time before the pieces come together.

Just like Karen, Galbraith was a police officer in Colorado who often volunteered to take rape cases. She was also an empathetic wife and mother. In the series, Karen returns home after taking Amber's statement and describes the case to her husband, also a detective, and he tells her his department has a case that sounds exactly the same. This is exactly as Galbraith was described in the ProPublica article, "An Unbelievable Story Of Rape," on which the series is based.

Sergeant Hendershot lived and worked in Golden, Colorado, where she had investigated "more than 100 rape cases" in her career. She had already responded to one report of a woman who had been raped by an intruder when she received an email from Detective Galbraith about a similar case in another location. Soon Hendershot and Galbraith started working together to connect the dots.

In the process, they realized they were looking at a serial rapist; too many of particulars of the cases were the same. A man in a black mask broke into the homes of women who lived alone, tied them up, assaulted them, and occasionally left with a warning about leaving windows open or doors unlocked. He also took photos of the women to use as blackmail. Hendershot and Galbraith were able to link four cases together, and eventually evidence pointed to an army veteran named Marc O'Leary. Touch DNA and a distinct egg-shaped mark on one of his legs appeared to confirm it; per ProPublica, O'Leary pled guilty to "28 counts of rape and associated felonies" and was sentenced to 327 and a half years in prison in Colorado.

Television shows based on real events tend to alter some facts, or combine real people to create composite characters. But there are enough similarities between Karen and Galbraith that it certainly seems like the detective served as inspiration.

Unbelievable is currently available on Netflix.