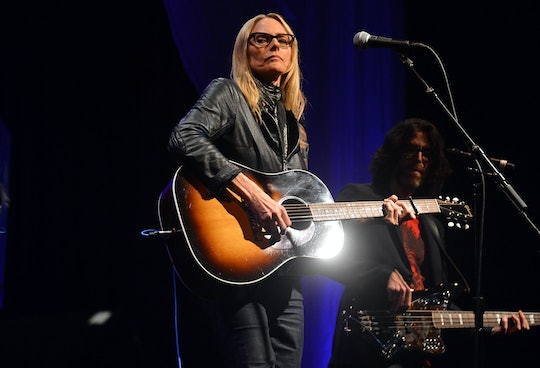 "House by the Lake" was bookended by two murders: first Andrew Cunanan beat his friend Jeff Trail to death, and later he shot his ex-boyfriend David Madson. In between, Andrew coerced David into going on the run with him, trying to make him complicit in Jeff's death as a way of forcing David not to leave him. At one point in their journey, they ended up at a bar where a very familiar singer managed to make Andrew weep. So who was the singer on American Crime Story?

The singer was none other than Aimee Mann making a surprise cameo on The Assassination of Gianni Versace. She wasn't playing herself — Mann definitely wasn't picking up gigs at dive bars in Minnesota in 1997 — but instead a nameless performer who seemed to have an impact on both Andrew and David. She sang a cover of the 1984 hit "Drive," which was by the appropriately named band The Cars. While the performance was going on, David went to the men's room and used his jacket to break the glass in the only window. It seemed like he was making a run for it but, as the music continued in the background, he decided to return to Andrew instead.

Andrew, meanwhile, was having a visibly emotional reaction to Mann's performance. Throughout the series so far, he has often been unreadable or conspicuously cold, so buried in his layers of lies that it was impossible to tell what he was actually thinking or feeling. But whether it was Mann's voice or the lyrics she was singing, he was brought to tears that seemed (at least in the moment) to be real. It mirrored the moment in the first episode when he began to weep at the opera, though that seemed more like a conscious choice — as though he wanted to be the kind of person who cried at the opera.

The lyrics of "Drive" were rather pointed in their accuracy, hitting on Andrew's fears of being abandoned and why that might make him cling so intensely to David, a man who had already rejected him. "Who's gonna come around when you break?" Mann sang. "You can't go on thinking nothing's wrong." Andrew had done just that throughout the entire episode, first by trying to tidy up the crime scene and take the dog for a walk like any other day, then by bopping along to the car radio post-murder as though he and David really were on a normal road trip.

Whatever motivated David not to escape through the window was over as soon as Mann was done singing. He confronted Andrew with all the lies he had told since the day they met, making it clear that David was not going to be the one driving Andrew home tonight, emotionally-speaking. He was done with Andrew. From there on, things continued to deteriorate between them until Andrew shot David on the shores of East Rush Lake. "Drive" was a turning point, but it didn't turn out the way Andrew wanted.

Mann doesn't appear to have commented on her guest spot (and likely couldn't until the episode aired), but it was as nice a surprise as seeing Cathy Moriarty show up as a pawn shop owner in previous episodes. Mann has supplied her music to TV and film before, even popping up in episodes of The West Wing, Buffy the Vampire Slayer, and, much more recently, Portlandia. Lending some time to The Assassination of Gianni Versace is nothing new for the singer, but her unexpected appearance was one of the more memorable musically-driven moments of the show.