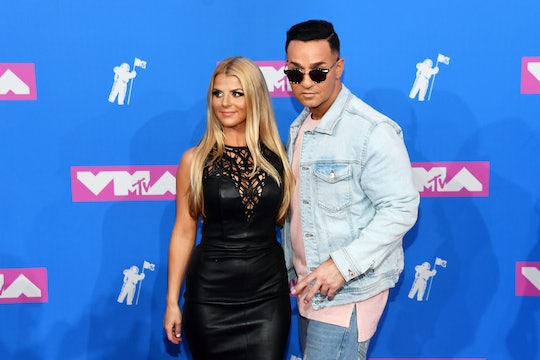 Before heading off to prison on tax evasion charges, Mike "The Situation" Sorrentino had the wedding of his dreams on Jersey Shore Family Vacation. The two-part event will continue on MTV in "The Hitch-uation Pt. 2" on Aug. 15. Mike's bride is already part of the family, but fans who want to get to know her better may be wondering who the Situation's wife is.

Lauren Pesce is, officially, Mrs. The Situation. Though she and Mike didn't get engaged until February 2018, they've been together (on and off) for years. They first met in college, according to an exclusive interview Lauren did with Life & Style in May 2018. She revealed that they met in math class and hit it off right away. Mike elaborated on the trajectory of their relationship while talking to People, explaining that it wasn't quite a straight line from math class to the altar. After they met, they dated for four years, but took a break for the first six seasons of Jersey Shore. "Once [the show] was over, we eventually reconnected and have been together ever since, for over four years now," Mike said.

There have been other ups and downs, as well. Mike struggled with addiction and went to rehab twice in the last decade, though he is now three years sober. To People, he said that Lauren was the "reason why I strive to be the best version of myself and to fight for our future."

Lauren's Instagram is composed of outfit posts, Jersey Shore promo, and the odd Fab Fit Fun subscription box, but that's not all she has to share. In her bio, she links to an online store that sells Situation-specific merchandise, now emblazoned with the slogan "Free Sitch" because of his time in jail. She links to their joint YouTube account, The Situations, as well. There are only three videos up currently, but it appears their content is typical of lifestyle YouTubers: there is a skin care video, tips on wedding flowers, and a video in which Lauren and Mike introduce themselves to their online audience.

According to her LinkedIn page, Lauren is a realtor with VRI Homes in New Jersey and has worked with them since 2015. Before that, she was an Associate Buyer at Saks Fifth Avenue for two years; even earlier, she was an intern with Chanel and Bergdorf Goodman. It seems like she has an interest and background in fashion, so you know all those Instagram ensembles are coming from an expert in the field.

Lauren is still listed as an agent on the VRI Homes website. In her official bio, she explained why real estate was the perfect fit for her, saying, "I am thrilled to have found a profession that will allow me to use both my analytical and creative sides daily." She also appreciated getting to show off the "magnificence" of her hometown.

A few months after their November 2018 wedding, Mike began serving his eight month sentence for tax evasion, according to People. Since his sentence started in January, he should be released soon, and he and Lauren can embark on the rest of their married life together.