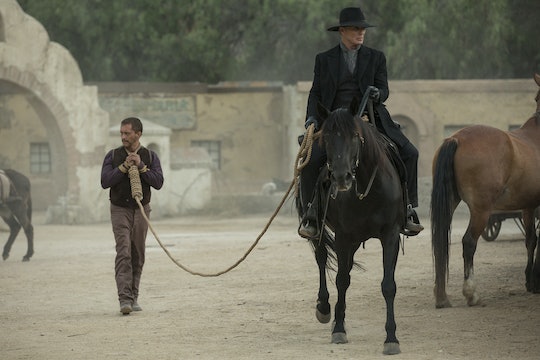 Who Is "The Stray" On 'Westworld'? The Rogue Robot Could Be Dangerous

Almost from the moment we were introduced to the artificial domain of HBO's newest series Westworld, we were introduced to the existence of its glitches. Despite the fact that the debaucherous "theme park" was run like a well-oiled machine, its employees quickly realized that not all was quite right with their robots. Bugs in the hosts' hardware appeared to be spreading like wildfire, starting with two robots, Peter Abernathy and Walter. In Episode 3's "The Stray," we met a new host experiencing glitches of a whole new (and terrifyingly violent) variety. But who is "the stray" on Westworld?

The titular "stray" of Episode 3 was yet another robot who had begun to malfunction, sending the park's employees into a panic. It was Elsie who was first alerted to the existence of the stray – notably, while she was discussing her disturbing theory about another glitching robot (Walter) with Bernard. Elsie was interrupted in the midst of explaining that she believed Walter had gone homicidal and sought revenge after somehow accessing prior memories of other hosts who had killed him in the past – something that Walter should have forgotten. A ping sent to her tablet showed her that the new "stray" robot, a male woodcutter, had wandered far off course and needed to be retrieved.

As it turned out, wandering off course wasn't the only strange thing that their missing host was up to. When Elsie and Stubbs, the head of security who vaguely seems to have a thing for her, set off to track the missing robot, they discovered the camp site where he'd been holed up with a group of fellow robots. There, they found that the stray's fellow robots had gotten stuck in a loop after the designated woodcutter wandered off, because they were programmed to eat dinner before heading back to town. Only one host – the stray – had "weapons privileges" allowing him to wield an axe for firewood. This tidbit about weapons privileges would become super relevant later on in Episode 4, when it came to Dolores' sudden, unprogrammed ability to shoot a gun.

Elsie also discovered that, in addition to wandering off, the stray host had randomly started inscribing a constellation (Orion) into all of his hobby wood-carvings – something he wasn't at all programmed to do. When Elsie and Stubbs eventually found the host, blood-covered and being generally creepy stuck down in a hole, they attempted to put him into sleep mode to retrieve him. Instead, the stray violent woke himself from sleep mode, attacked Stubbs, climbed out of the hole, and then proceeded to bash his own head open with a boulder while standing menacingly over Elsie.

One going theory is that the phrase "These violent delights have violent ends" triggers the robots' self-awareness and malfunctioning – it was first whispered from Peter Abernathy to Dolores, and then from Dolores to Maeve, all three of whom began glitching. If Maeve or Dolores interacted at all with the stray, it stands to reason that they might have triggered his malfunctioning with that phrase as well.

Regardless, the incident with the stray was terrifying and, more importantly, the first real hint to the Westworld employees that there might be something much bigger (and more dangerous) going on than a simple code glitch – something making the robots violent and harder to control. Chaos is definitely about the descend onto Westworld.