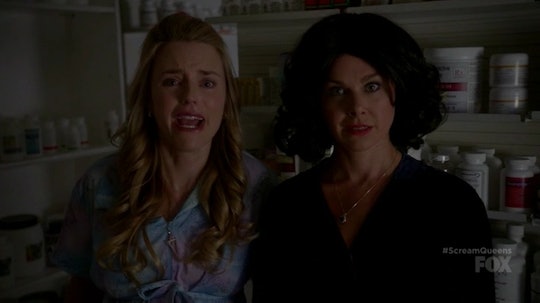 Who Is The Swamp Man's Wife On 'Scream Queens'? Here Are A Few Theories

When Scream Queens was first announced, it sounded like it would be a sillier, campier version of American Horror Story. Creator Ryan Murphy eventually clarified that the show would not completely reboot season to season, but would rather bring surviving characters to a new location and killer. With the premiere of Screams Queens Season 2, though, it seems like the season's main mystery is gearing up to follow the exact same trajectory as Season 1's – complete with a pregnant woman at the center of the story. But who is the "Swamp Man's" wife on Scream Queens?

Much like the series premiere of Scream Queens, the second season opened with a flashback sequence that (apparently) serves to set the tone and present the backstory for the killer and mystery that will drive the new batch of episodes.

Whereas Season 1 saw the accidental death of Kappa sorority sister Sophia Doyle (who died in childbirth left behind future-serial-killer newborn twins), Season 2's intro featured the willful murder of a man named Bill who was suffering from COPD. In true over-the-top, suspend-your-disbelief-or-else Scream Queens fashion, the doctors on call at the aptly-named Our Lady of Perpetual Suffering hospital on Halloween night in 1985 simply didn't want to deal with this man when they could party instead – so they dumped him in a possibly-haunted, probably-radioactive swamp conveniently right outside.

The man's frantic (and heavily pregnant) wife, a blonde woman named Jane, was the one pushing the doctors to perform a supposed life-saving procedure for her husband, but as of yet, we have no idea what her reaction was to her husband's sudden disappearance. Dr. Mike, aka the worst doctor ever, told his nurse/murder accomplice that they'd simply claim they gave the man the procedure and he'd released himself from the hospital only to suddenly go missing.

Flashing forward from 1985 to 2016, there's a new menace tormenting the hospital – the Green Meanie, a modern-day killer and/or actual monster wearing a green demon mask and costume identical to the one Dr. Mike wore on Halloween night and tossed into the swamp after Bill. If Season 2 follows the pattern laid out by Season 1, the obvious candidates for the identity of the killer are Bill (who was either resurrected in some supernatural fashion or never died to begin with), the unborn child of Bill and Jane, or Jane herself.

The reveals of Hester Ulrich and Boone Clemens as the twins who were out to avenge their mother's death in Season 1 of Scream Queens took place at the very end of that season. Odds are, whether or not Jane and/or her baby are the Green Meanie(s), we will discover their present-day identities in some kind of late-season twist.

If modern-day Jane is a character we've already met, these are the three most likely candidates.

Obviously, Hoffel's name is Ingrid Marie – not Jane. But it's completely possible that, 31 years after the mysterious disappearance of her husband Bill, Jane changed her identity and came back to be a nurse at the hospital (now the "CURE" Institute) where her husband once vanished. Plus, Kirstie Alley is just about the right age to be modern-day Jane.

Like Hoffel, Munsch is also just about the right age to be modern-day Jane. We learned a lot about Munsch's backstory in Season 1, but it's still totally plausible that Munsch's origin story is even more tragic than we could imagine. Plus, it would totally explain why she's being so sketchy and mysterious about her plans for the hospital's success.

Yes, I know he's a man, but this is Scream Queens and anything can happen. Bill's wife might very well might have been transgender and have come out only after his husband's disappearance. You never know! Holt also has that mystery tattoo on his shoulder (spotted while he was in the shower), which definitely seems like it'll be significant later down the line.