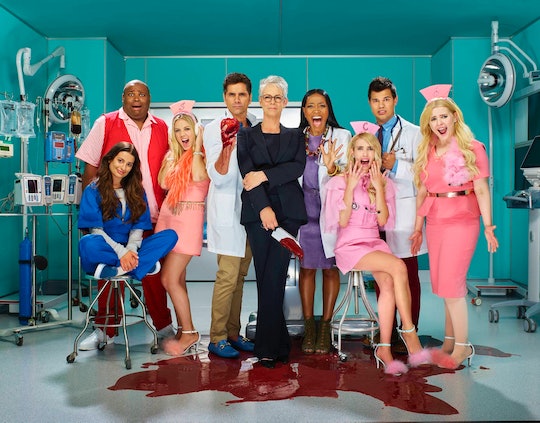 Who Is The Third Killer On 'Scream Queens'? Season 2 Has Introduced Several Green Meanies

Last Tuesday's episode of Scream Queens, "Blood Drive," revealed two of our primary antagonists for the season — well, to the audience anyway. The various Chanels and their friends/frenemies are still completely in the dark about the masked green killer stalking them. But viewers now know that it's Dr. Cassidy Cascade, who was unmasked by vengeful Nurse Hoffel and has teamed up with her to continue their separate revenge plots. But Cassidy made an interesting confession to Hoffel — he hasn't killed every victim in the hospital. So who is the third killer on Scream Queens Season 2?

By now, it's clear that this latest Scream Queens installment is following the same basic formula that it originated in Season 1. A baby at the heart of an unexpected death years ago, now grown up, has taken on the mantle of a masked serial killer to take their revenge. Said baby's status as a killer is revealed just past the midpoint of the season. Sound familiar? That's because this happened with Boone Clemens/Red Devil #1 in the first season and just happened again with Dr. Cassidy/Green Meanie #1. Except this time around, there don't seem to be surprise twins at the center of all the killings.

The only major deviation from the set-up of the first season is that, while Cassidy and Hoffel are working together now, the other killer donning the Green Meanie mask is operating completely independently. Unless Cassidy is lying to Hoffel (or Hoffel to Cassidy), neither of them know the identity of the third killer or what his/her motive is.

This sets up a much more fun dynamic, since we're possibly going to see two of the three killers at odds with the other one. If they're not working in tandem and their revenge plots don't add up, there's really nothing to stop them from a Green Meanie vs. Green Meanie face-off either. It'll also be interesting to find out which victims weren't killed by Cassidy. Just off the cuff, I'm guessing Chad Radwell was probably done in by the Unknown Third Green Meanie.

There are a few likely candidates for the identity of the third killer. Some of the more obvious choices are Hester, who's been a barely-restrained homicidal psychopath all season long, or Dr. Brock Holt, who definitely had motive to kill at least Chad and currently has a killer hand attached to his body. Somehow, I don't expect that Scream Queens (which prides itself on twists and turns and being unexpected) will go with either of those two very transparent choices for the third killer.

Instead, I'm a fan of the idea that the third killer is someone unexpected from the first season: namely, Grace (or Wes) Gardner.

Grace and her many, many hats definitely had it with the Chanels after the first season. While the motive for either of those Season 1 survivors to become a killer is slightly hazy, I wouldn't put it past this show to invent some complex rationale for the attacks.

Either way, Grace and Wes both made it out of Scream Queens Season 1 alive but haven't been mentioned or seen since. This was especially weird given that Zayday and Grace were, when we left off with the first season, supposedly best friends. Bringing back Grace or Wes (preferably Grace) as the third killer would be a great way to link the two seasons — and to reimagine a main character who was, objectively, kind of a dud (ahem, Grace).

Of course, there's always the chance that Chanel #5 might finally have had enough of Chanel's taunts and jabs and completely snapped.

Then again, probably not — but what an unexpected twist (and moment of character development) that would be! Fans will just have to wait and see if it comes to pass.