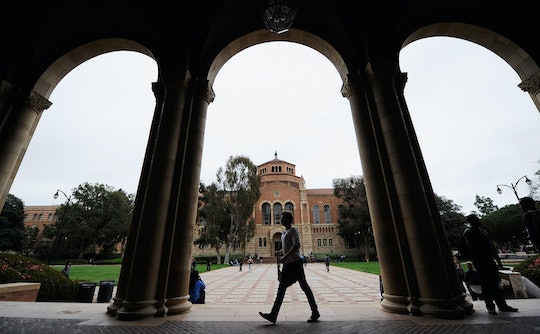 Who Is The UCLA Shooter? Police Are Releasing Few Details

A shooting Wednesday morning at the University of California, Los Angeles, in the university's Engineering IV building shut down the entire campus. Who is the UCLA shooter? The shooting suspect, or suspects, have not been identified yet. UCLA's student-run newspaper, Daily Bruin, reported that the shooter was wearing a black jacket and black pants.

Law enforcement officials have confirmed that two people, both males, have been killed, according to TMZ. The Los Angeles Police Department confirmed the shooting was a murder-suicide, the Los Angeles Times reported. The shooting occurred at the campus' engineering building, Boelter Hall, and the entire campus was placed on a lock down around 10 a.m., the Times reported.

Authorities confirmed the campus was officially safe shortly after a news conference that took place around noon. "The important thing for people to take away from this is the campus is now safe,” LAPD Chief Charlie Beck said in the news conference, according to the Times.

The Daily Bruin reported that the shooter was described as a white male, about 6 feet tall. The victim was not identified and the motive was not immediately clear.

UCLA freshman Teddi Maddox told CNN that she wasn't able to stop shaking for a hour and a half after the campus went on lockdown after the shooting.

We got the alert and a woman said, 'This is not a joke, everyone get to the back of the dining hall because we have to stay away from the windows. We're crowded back here, we've been here for at least an hour and a half. People are crying, they're nervous, they're shaking.

The LAPD will lead the shooting investigation, CNN reported. Authorities continued to search the campus, "out of an abundance of caution" after they officially confirmed it was safe, the LAPD noted on Twitter.

Since morning, UCLA students have been actively updating their social media accounts with information on the campus' lockdown and pictures and videos capturing the various safety precautions they took.

Freshman Melanie Beecher told the New York Times, that she was on her way to her philosophy class when she received the campus-wide alert.

“Immediately we barricaded the doors, blocked openings with trash cans, turned off the lights, and pulled down the blinds,” she said.

The relationship between the two people in the murder-suicide at UCLA has not been determined yet, but police believe that one of the people killed could have been a professor who was shot by a possible student, and that that student turned the gun on himself, the Times reported. A LAPD spokesperson reportedly confirmed that a note was found at the scene.