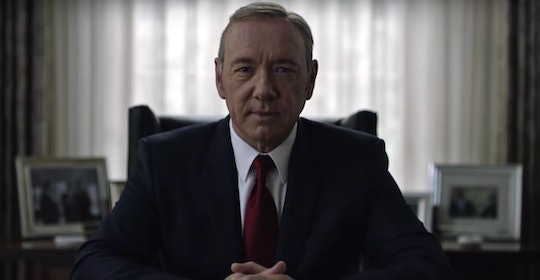 Who Is The Vice President On ‘House of Cards’ Season 3? There May Be A Change On The Way

House of Cards is back for Season 4, and fans are pumped to be reunited with Frank and Claire Underwood for another 13 episodes of political intrigue. If you haven't watched the first three seasons (or you just haven't seen the episodes in awhile), it's easy to lose some of the threads of the increasingly intricate plot. Who is the vice president on House of Cards Season 3? While Underwood is president, it's Representative Donald Blythe. (If you aren't caught up on Season 3, there may be spoilers ahead!)

In Season 3, Underwood becomes president after his predecessor resigns, according to the House of Cards Wikia. Underwood elevates Blythe to vice president, hoping that he won't be a troublemaker and that he'll avoid roadblocks with the Republicans. Now, Season 4 begins with Underwood campaigning for the presidency; Blythe's future as VP is unclear.

Season 3 left viewers tensely following the progression of Frank and Claire from partners to adversaries. Frank tried to use Jackie Sharp to edge Heather Dunbar out of the presidential race, according to ABC News. While angling at home, Frank confronted foreign policy issues by asking Claire to resign as U.S. Ambassador to the United Nations.

Claire also learned that she wasn't an equal in Frank's eyes, more often used to advance his personal goals than to further their joint ambitions, according to The New York Times. The season ends when Sharp endorses Dunbar and Claire leaves Frank, even as Frank wins in Iowa, ABC News reported. Frank had initially promised Sharp the vice presidency if she could successfully push Dunbar out of the campaign, but her surprise swing to Dunbar's side leaves viewers unsure of who could be VP if Frank wins the White House.

Now that Season 4 is streaming, fans are eager to find out whether Claire and Frank will be able to rebuild their relationship and who could help Frank make a successful run for president. So far, reviews of Season 4 are looking good. Daniel D'Addario of TIME wrote that longtime followers of House of Cards will be satisfied with the direction it's taking:

House of Cards, in its first, best season, was the sort of show where the table could get entirely reset suddenly and shockingly; we’re back there now, and it’s as thrilling as it was then.

If you haven't tuned into the show since its first season, now sounds like the time to check back in.