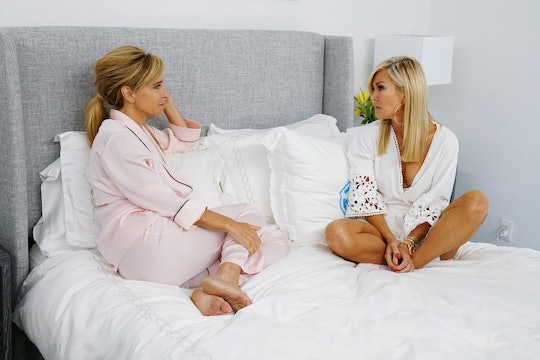 Sonja Shares A Smooch With A Mystery Party Guest On 'RHONY'

In "It's A Clam Shame," Sonja Morgan hosted an opulent party to celebrate her photoshoot for Paper magazine. That get-together will continue into the next episode of The Real Housewives of New York, where the promo reveals Sonja laying a smooch on a mysterious party guest. But who is the woman Sonja made out with on RHONY?

The mystery may continue until "Making Up Is Hard to Do" airs Wednesday on Bravo. The woman in question is a brunette roughly Sonja's height wearing some kind of shiny jacket or hoodie. The promo for the episode focuses more on Tinsley's startled reaction, set in amusing contrast to Bethenny's casually disinterested, "What's going on? Are they making out?"

The woman doesn't appear to be one of Sonja's RHONY cast mates, because all of the brunettes on the show are otherwise accounted for. And a perusal of Sonja's social media doesn't reveal anyone fitting the stranger's description. She may be a friend of Sonja's or someone affiliated with Paper magazine; she might be someone Sonja met that night and liked enough to kiss. Only one thing is clear: whoever this woman is, she leaves Sonja totally #shook by the liplock. So that's very nice for Sonja!

While Sonja has never publicly announced that she falls anywhere on the LGBTQ+ spectrum (she has only ever said that she's straight), this isn't the first time she's kissed a woman on the show. When the Housewives traveled to Mexico in Season 9, Sonja announced that when she drinks, "I just want to suck my girlfriends' faces off." On the same trip, she attempted to kiss Luann and later gave Bethenny a smooch, too. As Ramona Singer told Bravo's The Daily Dish, "Sonja kisses everybody. She's a kisser and a lover."

Sonja did recently retweet Pierre Amaury Bouvier's tweet about fluidity that stated there was "no straight line" in the human body, the human mind, on earth, or in the universe. She may have been retweeting in support, or it could have been a sentiment she agreed with; there's no way to know for sure without a statement from Sonja herself.

The photoshoot for Paper was all about Sonja modeling a Telfar Clemens Shopping Bag, a vegan leather bag that's supposed to work in all occasions. Clemens appeared at the party, too, with Sonjoa boasting, "This is what I do. I bring people together." The pair appears to be friendly; Clemens referred to Sonja as his "sister wife" in an Instagram post, according to Vogue.

Sonja's celebration seems to have been a success, though it may take a turn in "Making Up Is Hard to Do" when Dorinda Medley and Luann de Lesseps finally make contact after months of tense feuding. But that's a worry for another day; it looks like the event was everything Sonja could have hoped for it to be. As for the identity of her Paper party paramour, that remains a question mark — at least until the next episode of RHONY, that is.