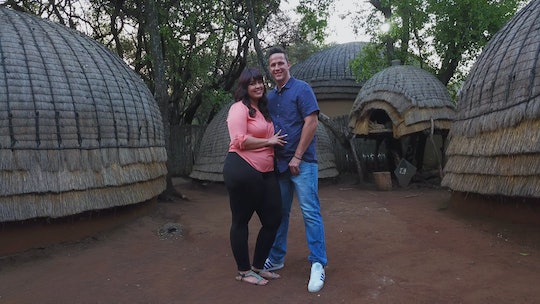 Tiffany Is A Young Mom Moving To South Africa On '90 Day Fiance: The Other Way'

TLC’s new series, 90 Day Fiancé: The Other Way, follows six Americans as they make the decision to move to a foreign country to be with their fiancé. After watching the trailer, viewers were intrigued by one cast member in particular. She’s a young mom who’s uprooting her American life to move to South Africa, but what else should viewers know about her? Who is Tiffany on 90 Day Fiancé: The Other Way?

According to a TLC synopsis, Tiffany is a 27-year old mom who fell in love with 29-year-old Ronald when she was on vacation. “While on a trip to South Africa with a friend, Tiffany met and fell in love with Ronald, who quickly proposed,” reads the network’s description of the show. “Tiffany said yes, but Ronald neglected to tell Tiffany about his gambling addiction and criminal record. Since Ronald came clean and entered a rehab program, Tiffany needs to decide if she will uproot her eight-year-old son Daniel to move across the world for him, in spite of her hunch that she still doesn’t know everything about his dark past.”

In a sneak peek for the season, you can see how difficult this decision to move to South Africa is for Tiffany, particularly because she’s bringing her son. “It’s not just me deciding whether I can live in South Africa, it’s also my son Daniel,” she says in the clip. But when she’s finally there with Ronald, she starts realizing that he wasn’t as transparent as she thought he was. “I just can’t shake the feeling that there is something I still don’t know about Ronald.”

In another TLC trailer for the upcoming season, there is a clip in which Ronald greets Daniel with excitement and scoops him up into his arms. Through all their hugs and kisses, Tiffany and Ronald look genuinely happy, and Ronald even lets out a hearty “I’m feeling fabulous” to the camera. But in a later scene, the two are driving down a South African road, and get into a fight about finances.

Then, at the end of the clip, Tiffany tells Ronald that he should understand why she has issues trusting him. “You’re going to blame me for having trust issues with you,” she asks him through tears. “When you [bleep] did all the [bleep] you did? “If you can’t do what I need from you so that I can be okay, then it’s not going to work.”

But despite her concerns, it looks like Tiffany may have said “I do” to Ronald. Her Instagram user name is Tiffany Ronald Smith, and her page is filled with loving pictures of the couple. She also shared a picture of herself in a wedding dress, which is another huge clue that the two are now married.

If you want to know more about Tiffany, and how her life and relationship with Ronald unfolded in Africa, you’ll have to keep watching through the season, and you can keep an eye out on her Instagram page for updates.