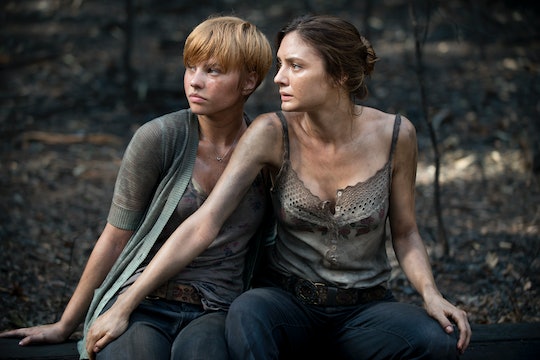 Who Is Tina On 'The Walking Dead'? Sherry's Sister Was A Savior

When Daryl first encountered a ragtag group of survivors in a burnt-out forest in Season 6, it didn't seem like those characters would be particularly important. A lot of side characters come and go in The Walking Dead, after all. However, the people Daryl met – Dwight, Sherry, and Tina – have proven to be more significant than they first appeared, particularly in regards to Dwight and Sherry, who are big time players in Negan's group of Saviors. Tina met her demise early on, but she was actually the catalyst that set in motion the events that brought Dwight and Sherry to where they are now. But who is Tina on The Walking Dead?

Tina is Sherry's sister, and it was revealed in "The Cell" that Tina was the reason Sherry and her husband Dwight attempted to escape Negan's clutches in Season 6. All three were members of the Saviors who used Negan's point system to earn things they needed. But the problem was that Tina was diabetic and needed insulin to survive, which came at a high cost. Eventually she could not produce enough to earn her medication. Negan proposed marriage to her as a solution, because that would give her special privileges like receiving medicine without having to work for it. Tina said she would think about it, but instead she, Sherry, and Dwight cleaned out the Saviors' medical supplies and got the heck out of Dodge.

Tina only appears in the Season 6 episode "Always Accountable," which was when she was on the run with her sister and brother-in-law. She doesn't have a comic book counterpart because not much is known about Sherry's life outside of her relationships with Dwight and Negan in the comics. Tina seems to have been invented to provide motivation for Sherry and Dwight to escape, though it ended up costing them.

All three of the escapees torched a forest to try and clear it of walkers, but this also resulted in them accidentally killing two girls they had been friends with before the outbreak — two girls that the sisters used to babysit for. Tina tried to lay flowers on the bodies as a sign of respect, but she was startled by the corpses reanimating into their Walker forms and clumsily fell on top of them, where she promptly became zombie chow. After Tina's death, Sherry and Dwight returned to the Sanctuary and Sherry offered to become Negan's wife instead so that they wouldn't be killed for what they had done. But the betrayal still earned Dwight an iron to the face.

So even though Tina is a relatively small character in the scope of the show, her actions had long-reaching reverberations. If it wasn't for her, neither Dwight nor Sherry would be in the positions they're in now, but that doesn't mean they'd be any better off, either. Living under Negan is impossible no matter what you do.