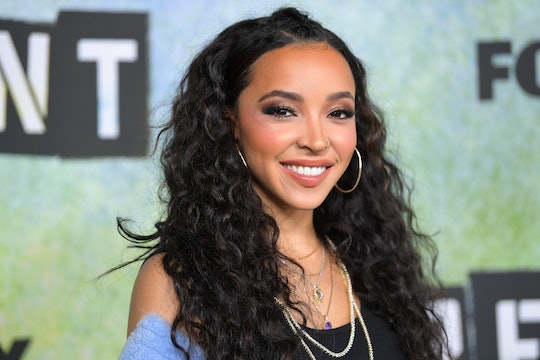 Who Is Tinahse? The R&B Singer Will Play Mimi In 'Rent: Live'

There are some musicals that you need to see whenever they're playing, no matter what. Fans of Rent have eagerly awaited their next chance to see the hit Broadway musical. Now, Rent: Live is less than a month away. If you've read over the cast list, you may be wondering: who is Tinashe? The R&B singer is set to take on the role of Mimi Marquéz.

On Sunday, Jan. 27th, Rent: Live will appear on Fox. According to Fox's website, Rent Live will air from 8 to 11:00 p.m. EST / PT tape-delayed. Since Rent's original Broadway premiere in 1996, Rent has earned multiple awards, including several Tonys. And in 2005, the musical was even made into a movie.

That means Rent has garnered a really devoted fanbase over the years. There are, of course, people who have still never seen the show, but there are also people who have seen it tons of times. All of them are excited to see Fox's take on the hit rock musical, but fans are understandably curious about some of the names behind the big roles.

As the date approaches and fans comb social media for any news, they might want to know a bit more about the singer taking on the role of Mimi Marquez.

If you don't know Rent, Mimi Marquéz is part of the show's ensemble cast. Within the play, she's a dancer who is also dealing with a drug addiction and is HIV-positive like her love interest, Roger. Mimi's role is pretty important, but fans don't have to worry about Tinashe, the singer set to take the role on.

Tinashe was a member of The Stunners, a girl band, from 2007 until 2011. Afterwards, she embarked on a solo career, releasing two mixtapes in 2012: In Case We Die and Reverie, which was, as noted by Genius, recorded in her own bedroom. In 2014, her single "2 On" made it to number 21 on the U.S. R&B chart, according to Famous Birthdays.

Fans of Tinashe are excited to see her take on this role. On Jan. 20, Tinashe posted a rehearsal video on her Instagram.

"in just ONE WEEK we perform RENT LIVE. We’ve been rehearsing this material since November, so the anticipation is reeeeeeal! ..this clip is from very early on in the rehearsal process," she wrote in the caption.

"OOOO MMMM GGGG! I missed that memo! I’ll be sure to watch now that I know you’re in it!" one fan said. Another user added, "Gave me goosebumps! Excited to watch!"

"Tinashe, you sound beautiful. You know how to put on a show too. Great performer," one fan complimented.

It can be hard to take on a role in a musical as widely known as Rent, but it seems that Tinashe is up to the challenge. This version will air live, which means everyone needs to be on top of their game, but it's clear that Tinashe's fans know she won't let them down!