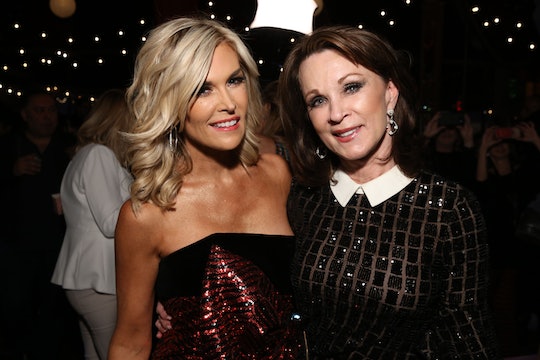 Tinsley Mortimer's mother shows up periodically on The Real Housewives of New York to act out scenes from what I can only imagine is a Grey Gardens prequel. She is a character in her own right who makes an impression every time she's onscreen. But if you've only seen her when she's peer-pressuring Tinsley into trying on wedding dresses when she isn't even engaged, then you might want to know more. So who is Tinsley Mortimer's mom Dale?

Dale Mercer has been described by several sources as an interior designer, though any information about her professional endeavors is difficult to find. Per PopSugar, she designed Tinsley's apartment back in the day when they both appeared on the CW reality show High Society (in which Tinsley's sister Dabney also starred). High Society was to Gossip Girl as Laguna Beach was to The O.C., though it had a much shorter shelf life. According to the Richmond Times-Dispatch, Dale was also known for her charity work in Richmond, Virginia, where Tinsley was grew up.

But Dale wasn't a Virginia native. Guest of a Guest described her as a New York socialite, much like her daughter would eventually become. Dale went on to marry George Riley Mercer, Tinsley and Dabney's father, though the two would divorce before his death in 2015.

Because Dale's socialite days weren't documented on Instagram and Twitter, there isn't much information about her life that's available online. She has embraced reality TV in the wake of Tinsley doing the same, but always connected to her daughter; she was a supporting player on the aforementioned High Society and appears on RHONY regularly, but otherwise Dale seems to keep to herself. Though considering her flair for shade, she should really think about making a career change. Not everyone can turn wearing a pair of shoes into a passive aggressive dig. It takes years to ascend to that level of pettiness.

The fact that Dale is still supporting Tinsley's ex-husband Topper Mortimer by sporting his wife Tabitha Simmons' shoe line speaks to how much she favored her daughter's first husband. In fact, she even reached out to the press amidst Tinsley and Topper's divorce to express her hope for their reconciliation. In 2009, Dale sent an email to New York Magazine explaining that every mother wanted her daughter to marry a man who would love her forever. She believed Topper was that man, and she hadn't given up hope that they would work things out.

But Topper and Tinsley divorced shortly after; at the time, Tinsley was linked romantically to Prince Casimir Wittgenstein-Sayn. Dale's willingness to discuss how she felt publicly via email proves that she's always been open to sharing her opinions about the state of Tinsley's love life. She'll be doing the same thing in the May 1 episode of RHONY, "Tears of a Clown," when she once again tells Tinsley what's what about her erstwhile boyfriend Scott.

Tinsley's mom Dale makes the most of every minute of screen time, so maybe sometime soon she can do a Tennessee Williams-style monologue that catches viewers up on her life so far. I have a feeling fans would be happy to hear it.