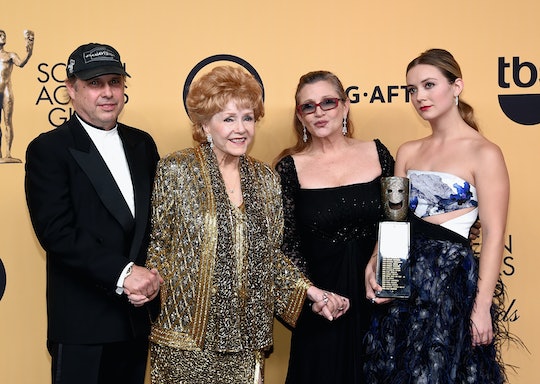 It's hard to believe that so much tragedy can happen over the course of 24 hours. And yet, here we are. Though it's only been a little over a day since Carrie Fisher died, the world has now learned that Fisher's mother, Debbie Reynolds has passed away as well, at the age of 84, after complications from a reported stroke earlier during Wednesday afternoon. It was Debbie Reynolds' son, Todd Fisher who confirmed her passing to TMZ in the end, who commented to the outlet that "She's with Carrie." I mean, talk about downright heartbreaking. This woman seems to have literally died due to a broke heart in the wake of her daughter's death. If that isn't enough to make you burst into tears on the spot then I don't know what is.

But who exactly is Reynolds' son? Though Todd Fisher is arguably the lesser known member of the family, he's still had a hand in the entertainment industry, even appearing in documentaries with his mother when he was just a little baby. But instead of acting, he preferred to focus on work as a cameraman and a producer. He later developed a professional background in architectural design and sound engineering. He is also currently the CEO and curator of the Hollywood Motion Picture Museum.

The media usually focused on the relationship between Carrie Fisher and her mother, but Todd was also very close to both of them and is undoubtedly going through an emotional nightmare right about now. He has lost both his sister and his mother in the course of one day, which is more than anyone could ever be expected to bear. And while it's almost impossible to find any ray of sunshine in this tragedy, it could be seen as somewhat comforting to know that Carrie and Debbie are now reunited once more.

Todd informed TMZ that his mother's final few words before succumbing to her stroke were thoughts of her daughter and how she longed to be with her. "I miss her so much, I want to be with Carrie," she said, according to Todd. So while that still means we are left in a world without them in it, it's nice to think that they have each other.

No one deserves to go through this much heartbreak, especially all at one time, but with the messages of love and adoration pouring out on social media for both Fisher and Reynolds, I hope that their family finds comfort in those sentiments and that it helps to give them the strength to get through this trying time.