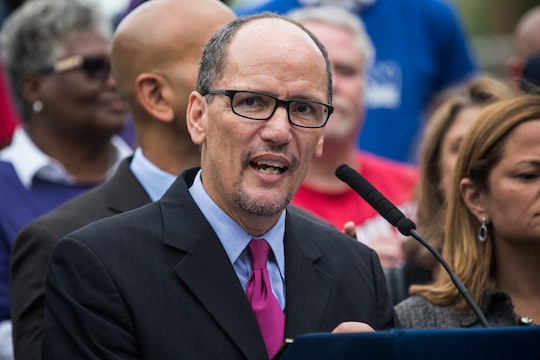 After a nail-biter race, the Democratic National Committee (DNC) has elected its first Latino chair, Tom Perez. Now that the Democratic party has new leadership, many might be wondering who exactly the former labor secretary is and how his background, beliefs, and policies will impact his new gig. Perez's victory came after he drew in support from popular and admired Democratic figures, like former presidential nominee and Secretary of State Hillary Clinton and President Barack Obama, as well as Vice President Joe Biden.

Born in upstate New York, the 55-year-old civil rights lawyer's resume is substantial. He began his political career as a law clerk in Colorado in 1987 and quickly moved up in the ranks as a federal prosecutor two years later in 1989. In the following years, Perez later became the Deputy Assistant Attorney General for Civil Rights under the Clinton administration.

Most recently, Perez ran the Department of Justice's Civil Rights Division under Obama and later served as his secretary of labor. While he held those positions, Perez expressed his support to raise the federal minimum wage to $15 an hour as well as the Trans-Pacific Partnership, the trade agreement between 12 countries that border the Pacific Ocean which President Donald Trump abandoned after only three days in office, according to the BBC.

The Trans-Pacific Partnership had been a hot-button issue with politicians and voters, especially during the 2016 presidential race. Although neither Clinton or Trump supported the trade deal, Perez said as recently as July of last year that he was still in favor it, calling it "some of the most far-reaching protections that we've seen in a labor agreement," according to Politico.

Moving forward into this new role as the DNC's chair, Perez plans on paying attention to a group of voters that may have felt ignored by the Democratic party: rural Americans. Earlier this month, on Feb. 9, Perez told ThinkProgress that he’d like to change this outlook:

I’ve spent the last few weeks in rural Wisconsin and Kansas. I think the DNC chairs needs to make house calls, and what we need to do as party is ask, ‘Why did we fare so poorly in big swaths of rural America? What is it about our message that’s not resonating?’ What I learned in these trips is that rural Democrats are discouraged about the fact that the national party does not provide enough help. We’ve ignored them.

Perez began his term as the newly-elected DNC chair by appointing Keith Ellison, a Muslim congressman from Minneapolis whom Perez defeated by 35 votes, as the party's deputy chair and received unanimous consent from the assembly of Democrats.

After tapping his chief opponent to work alongside him, Perez and his fellow Democrats will now begin to re-orient the party with the hope of getting Democrats back in the White House come 2020.