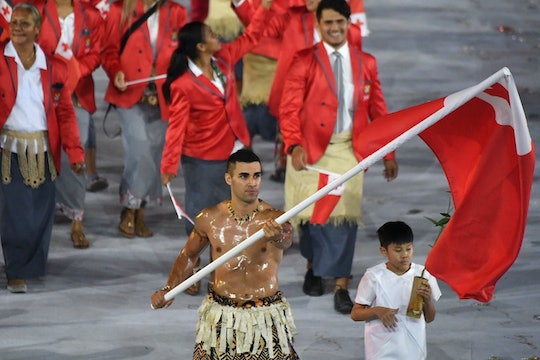 Who Is Tonga’s Flag Bearer At The Rio Opening Ceremony? He's Getting Plenty Of Attention

Oiled and shirtless, one man earned so much applause at the Olympic opening ceremony that you'd assume he was a native Brazilian but nope, not exactly. The flag-wielding athlete is actually from Tonga. He led his country in true, greased-up, and totally jacked fashion. We're all dying to know: Who is Tonga’s flag bearer at the Rio opening ceremony?

The name you're looking for is Pita Taufatofua, a 32-year old who will represent his country in Taekwondo on Saturday, August 20. He qualified for the Olympics this past March when he won a fight against the number 15 fighter in the world, New Zealand Heavy Weight Champion Daffyd Sanders. Taufatofua will compete for a medal in Rio against 128 other Taekwondo practitioners.

In a Facebook status that Taufatofua posted the day of the ceremonies, he wrote: "Olympic opening Ceremony tonight! Pumped! We have a little surprise.. Don't blink or you'll miss it ;)‪." Sorry, Taufatofua, but all eyes are on you from here on now, no blinking. Perhaps, though, there will be some squinting because, man, you're so, so shiny. The full outfit, from head to necklace to skirt (called a ta’ovala, a Tongan mat), caught everyone's attention, as people worldwide googled "Where's Tonga?" and made immediate plans to move there.

A look through Taufatofua's Instagram gives a more well-rounded picture of what he's all about (you know, to increase your chances of compatibility, should the whole I'm-moving-to-Tonga think work out for the two of you). He posts images of his training, stretching, fighting, and, oh gosh, there's a video. Watch it below and notice how his luster has not altered between this and the initial photo. Bless.

Pita Taufatofua's Instagram account is totally worth following. In addition to his own training, he spends his time volunteering, fundraising, and teaching young kids Taekwondo. Though slippery, he seems totally sweet. He also attempted to personally finance his road to Rio: Taufatofua's self-funding page on generosity.com outlines his goals as, in his words, "a complete underdog." His page asks for donations to contribute to his Rio travels, training, and various coaches. Now enjoy the thirst below:

Here's hoping that all forthcoming Olympic surprises are of this caliber and this temperature. In a seemingly never-ending parade of countries, Taufatofua offered some much-appreciated respite to the potential monotony. I predict that Taekwondo has earned a few (thousand?) more new fans tonight—fans that will whatever they can to tune into the August 20 fight that will feature their new fave.