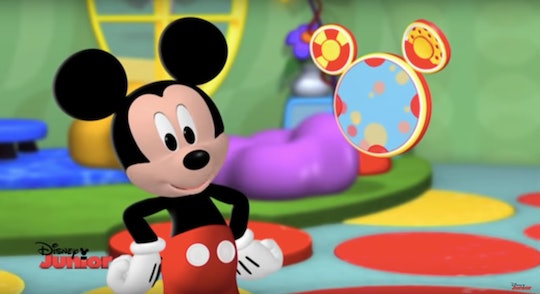 Who Is Toodles? Answering One Of The Great Parenting Questions Of Our Time

Since becoming a parent, I've been besieged with profound questions about the universe: how does one teach a toddler the meaning of consent? How, exactly, did I manage to create life? Why is it that throwing a ball at a group of toddlers on the playground has the same effect as tossing a human carcass into a crowd of George Romero zombies? Yet the question that is foremost on my mind at almost all times is the following: Who or what is Toodles, the thing from the Disney Junior TV show Mickey Mouse Clubhouse?

Toodles is a character — or more accurately, a floating omnipotent being — on the Disney channel, and kids love him. I know this because they will yell at their TV, on command, “Oh TOOO-DLES,” at the designated moment in the show. It’s a lot like how adults watching Law and Order: SVU will turn to their partners and gleefully sing “chung-CHUNG!” the second they see that New York city skyline shot, or exclaim “he did it!” when they see a semi-recognizable sitcom actor, like the guy who played the dad on Family Ties, come on screen.

Mickey Mouse Clubhouse is a computer-animated cartoon featuring Mickey, Minnie, Donald, Daisy, Goofy, and sundry minor Disney characters — the same gang you loved in your own childhood, but brighter, happier, higher-DPI, and marginally more educational. Each episode follows the characters as they congregate at their tricked-out clubhouse and solve various real-world problems, such as how to file for a tax extension or negotiate for a raise despite the persistence of the gender pay gap (JK, they do things like retrieve coins at the bottom of a lake). To execute their mission, the characters call on Toodles for help (“Oh Toodles!”), and it retrieves a tool of some sort — things like a fishing rod or a rain tarp or a shoelace end — requiring the gang to get creative to solve the problem.

He/she/it is a rainbow-colored entity shaped like Mickey Mouse that is often divided into quadrants. Its disembodied head has eyes and a mouth, the latter of which was introduced during the third season as part of an 'upgrade.'

Prior to becoming a parent, I had never heard of, let alone watched, Mickey Mouse Clubhouse (MMC). Yet ever since my 2-year-old son was introduced to it by his caretaker, the number of times my husband and I have watched it has increased from zero to approximately 472. It is woven into the very fabric of our domestic existence. On the scale of things my husband and I talk about often, it ranks lower than how tired we are, but higher than our son’s poops. Suffice it to say, we discuss MMC a lot.

Toodles is a character on Mickey Mouse Clubhouse, though we shall see that “character” is a generous descriptor. He/she/it is a rainbow-colored entity shaped like Mickey Mouse that is often divided into quadrants. Its disembodied head has eyes and a mouth, the latter of which was introduced during the third season as part of an “upgrade”; other than that, it bears few similarities to anything we encounter on a daily basis, let alone a living organism. It is many things: a Clubhouse-bound ghost, a computer program, a host, an avatar. It is Synergy, it is HAL 9000, but, you know, good.

Yet it shares a handful of human qualities: it moves (or, more accurately, hovers around). It talks (although not consistently, and when it does, it has a bizarre Teddy Ruxpin-esque stutter). It is capable of empathy, and therefore must be assumed to have attained theory of self (but what self?). Perhaps most confusingly, it has a birthday, as documented in the episode “Happy Birthday, Toodles.” (In the episode, it is explained that this commemorates the date that Professor Ludwig von Drake, a brilliant duck with a Bavarian accent, created Toodles, though the inciting event for Toodles’ naissance is not explained.)

Children do not question this, and the show makes it clear that Toodles’ origin is beside the point. We need only concern ourselves with Toodles’ function, per the lyrics to the Toodles theme song, “Mickey’s Mousedoer”: Toodles is generated by a machine called the Mousekedoer, for the express purpose of providing Mickey and his friends with the tools they need to solve problems:

You're a thinking and a solving working througher

Oh Toodles, it's time to get to it

Show us the mouseketools to help us do it!

Toodles has the tools, the mouseketools!

So when we need them

Toodles will bring them!

And all we have to say is "oh toodles!"

I’ve Googled these lyrics a number of times, and find them stubbornly resistant to interpretation; in fact, I would argue that they obfuscate the purpose of Toodles more than they enlighten, sort of the same way that if you stare at a word for a really long time, it is ultimately rendered meaningless. What is a Mousekedoer? How does Toodles collect all of these seemingly random tools (after all, he has no arms, nor prehensile hands) and to what end? Is Toodles Mickey’s friend, or a butler of sorts? Is it compensated for its services, or is it expected to be at Mickey’s beck and call at all hours of the night? Does it have its own quarters inside the clubhouse? Or must it be charged at some point during the day? Is Toodles a smartphone, or is it an AI assistant, like Siri or Cortana or Alexa? (If so, that would be eerily prescient, as the show started airing in 2006 and ended its run in 2016, meaning that it actually predated the launch of all three.)

According to the limited research available on Toodles, the latter explanation is closest to the truth: though representatives for Disney Junior and Rob Paulsen, the actor who voices Toodles, did not respond to requests for comment, an entry on the fan-sourced website Disney Wiki lists Toodles as a “super computer,” while a 2016 piece on Mickey Mouse Clubhouse by writer Lyz Lenz refers to Toodles as a “flying robot.” If that is the case, and Toodles is a piece of technology rendered incarnate by an animator appealing to a toddler’s imagination, then that actually makes a lot of sense; devoid of adult context, I’m sure my 2-year-old finds the constant presence of my iPhone just as mystifying as I find Toodles, but that doesn’t change the fact that he’s almost as obsessed with it as he is with Mickey Mouse Clubhouse, to the extreme distress of my husband and myself.

An entry on the fan-sourced website Disney Wiki lists Toodles as a 'super computer,' while a 2016 piece on Mickey Mouse Clubhouse by writer Lyz Lenz refers to Toodles as a 'flying robot.'

Unfortunately, I can’t confirm my theory that Toodles is a commentary on how children perceive the omnipresence of technology in our adult lives — my son didn’t have many insights to contribute to this article. When asked for comment on Mickey Mouse Clubhouse, Sol pointed to the television and said, “Moush. Ninnie. Doofy” (Mouse, Minnie, and Goofy, respectively). Of Toodles specifically, he said, “Oh, Doodle.” Then proceeded to ask me for money.

So maybe the question isn’t so much “what is Toodles,” or “who is Toodles,” but what, if anything, can Toodles teach us? What is our children’s relationship to this amorphous, colorful yet vaguely terrifying and omnipresent force known as technology? Should we question it, or fear it — or should we embrace it with open arms and a cheery “Oh, Too-dles”?

Or is it even worthwhile to ask this question to begin with? In a world where the biggest problems are how to use a fishing rod to retrieve coins at the bottom of the ocean, where slides serve as exits and where dogs treat other dogs not as equals but as pets, why should Toodles adhere to any rhyme or reason? Why do we adults insist on clinging to rationality in a world that simply does not make sense?

Perhaps instead, we should thank our stars that a Bavarian duck saw fit to create us at all.

More Like This
30 Great Non-Toy Gift Ideas For Kids
If Your Kids Love Their Elf, You Don't *Have* To Put Him Away On Christmas
Festive Mommy & Me Holiday Nail Ideas To Try
Spread Some Christmas Cheer In Your Child’s Bedroom