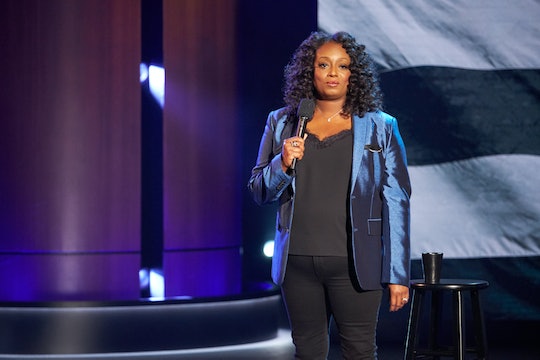 Tracey Ashley Will Leave You ROFL In ‘Tiffany Haddish Presents: They Ready’

In the first episode, Haddish reveals that Ashley is the only black female comic she knows who has worked every type of venue to establish herself. “She’s the only female comic that’s black that I know that has done cruise ships, colleges, executive parties,” she says. “I wouldn’t be surprised if she did a Mitzvah. She has done it all. If you didn’t know Tracey Ashley already, you’re gonna know her now.”

Ashley goes on to introduce herself in the episode, and reveals the bumps she’s faced in her career over the last two decades. “I’ve been doing stand-up comedy for 20 years,” says Ashley. “When I would do the clubs and I would look at the roster of who they had coming, there was maybe one female comedian I would see for the entire year, and definitely not African-American. I used to just put that prayer out that ‘God, I just need somebody who can say give her that opportunity.’”

If Ashley looks familiar, it’s probably because you’ve seen her on Haddish’s TBS show, The Last O.G., where she plays Ms. Ashley and also works as a staff writer. She was also a finalist on Last Comic Standing in 2014, and was featured on Wanda Sykes Presents Herlarious in 2013.

When talking to Vulture, Ashley explained that she was approached for the Netflix special after working with Haddish on The Last O.G.. “Tiffany said she’d seen me,” said Ashley. “She said she’d been watching my clips over the years and was wondering, ‘Why haven’t we seen more of this woman?’ — When Tiffany heard that I’d been doing this for 21 years, that’s when I felt like she knew it was my time.”

In an interview with the Los Angeles Times, Ashley talked about the frustrations of being a stand-up comic who’s been working for so long. “What frustrates me... how long it took,” she admitted. “I feel like the industry sometimes waits so long on some really good people that by the time they get there — it’s almost like, I’ve seen people who finally get their specials, and they look older, they look tired. You’re like damn, they went through so much.”

She also told the outlet that she hopes this Netflix special offers hope to aspiring comedians, and gives them a reason to keep working hard. “Hopefully, people who watch this who are aspiring comedians, or in any field that they’re in, see that we’ve all been doing this over 10 years, 15 years, 20 years and will see that we never give up, and that they shouldn’t either.”

You can catch Ashley’s hilarious half-hour set in the first episode of Tiffany Haddish Presents: They Ready, which is currently streaming on Netflix.