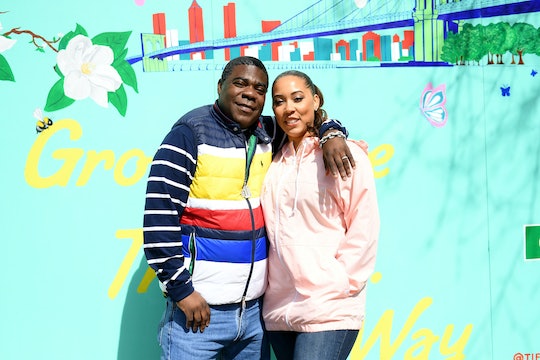 Comedian Tracy Morgan will be lighting up the stage as host of the 2019 ESPY Awards on Wednesday, July 10, and his beautiful other half will undoubtedly be cheering him on all night. But for those who aren't completely familiar with his personal life, you may be wondering who exactly is Tracy Morgan’s wife, Megan Wollover, the funnyman's biggest fan and supporter.

Like Morgan, 32-year-old Wollover is also in the entertainment biz. According to her IMDb page, she's an actress and model, and has signed on as one of the co-producers of Morgan's latest show, The Last O.G. Wollover has also recently been a host on Entertainment Tonight. While she’s a bit younger than her hubby, who's 50, their relationship has been solid ever since they started dating in 2011, according to the Los Angeles Times.

The couple married in 2015, about 14 months after the tragic limo crash that put Morgan into a coma and killed comedian James McNair, according to The Hollywood Reporter. The accident reportedly happened after a semi-truck driver attempted to keep driving despite having been awake for 28 hours and on duty for 13½ hours, according to The Washington Post. In addition to the coma, Morgan suffered a broken leg, ribs, and nose, and lost his memory of the accident; his attorney also said he suffered a traumatic brain injury, The Washington Post reported.

When the accident happened, the couple had only welcomed their daughter, Maven, about nine months prior. Maven is Wollover’s only child and Morgan has three sons from a prior marriage, according to Us Weekly.

Wollover spoke to Essence about that time after the accident and her dedication to Morgan. “You know, when you love someone. You stick in there. You pray for the best and you stick through it,” she told the magazine, adding that the experience taught her so much about herself that she hadn’t expected.

"I don’t think I ever really realized how strong I was until I was faced with something where we either had to sink or swim. Sometimes pressure makes people react better in situations," she told Essence in 2016. "...It was just like, you got to be strong, because if I break down, then what about my daughter? What about Tracy? It wouldn’t be good. I had to stay strong and be positive."

Sometimes that meant Wollover had to run interference. After the media reported that Morgan might be undergoing a leg amputation, she released a statement through her representative, as Entertainment Weekly reported at the time, which said in part: “Megan is respectfully asking that the media await official work through these channels before speculating (mostly inaccurately) on his condition."

Wollover’s Instagram account showcases a woman who is so proud of and dedicated to her family and is excited about her career. She often shares photos from the red carpet events she attends with Morgan, as well as snaps of Maven, who's now 6 years old, and Morgan.

More of those sweet and heartwarming photos will hopefully grace our Instagram feeds soon following Morgan's hosting duties at the 2019 ESPY awards.