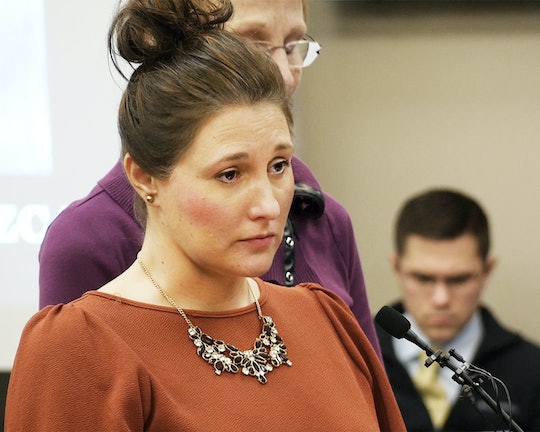 One of the biggest moments of Larry Nassar's Olympic career was when he was captured on video leading gymnast Kerry Strug, then 18 years old, off of the floor to treat her injured ankle. This was during the 1996 games, from which Nassar would later go on to treat other famous Olympic gymnasts such as Aly Raisman, Simone Biles, and Gabby Douglas. In a new HBO documentary called At The Heart of Gold, Nassar's career — and downfall after he was convicted of abusing several of the Olympic gymnasts he worked with — takes center stage. But it also might leave you wondering, who is Trinea Gonczar?

Gonczar's story stands out among hundreds for a reason. She was one of the last of Nassar's victims to stop believing him and understand that other women's stories were more than just misunderstandings. Nassar had been treating Gonczar's gymnastics injuries since she was six years old. When she accepted she was abused, she also realized that she was his that she was his most frequent victim. At the time she didn't know it was abuse, but Gonczar received Nassar's "treatments" an estimated 800 times, as reported by NPR.

But the sheer number of incidents she endured wasn't what inspired her to testify. Gonczar met with a group of girls the night before Nassar's sentencing, which led to her hearing Kyle Stephens' story. It was that story that gave her the strength to speak in court. "....That's when I really transitioned myself into the decision of I can't support him anymore and I need to support the girls. Like, I need to be here for these girls. I need to make friends with these girls, like, I need to, however I can, be there for them," Gonczar told NPR.

Nassar's plea deal is notable because, as reported by NPR, Judge Angie Povilaitis only agreed to it under two conditions. One was that Nassar admit in court that there was no medical necessity to any of those treatments "and that he did it for his own sexual gratification." The other was that every survivor who wanted to speak would be allowed to face him and tell their story.

Gonczar's mother, Dawn Homer, stood by her daughter's side as she spoke, and could see how powerful Gonczar's story was when she looked at Nassar. "When I saw him listening to the other gals, he was just stone," she told NPR. "But when he saw Trinea, his face completely drained and I thought, 'Oh, we're in for something here.'"

Here is a piece of Gonczar's statement:

I had to make an extremely hard choice this week, Larry. I had to choose whether [to] continue supporting you through this or to support them: the girls. I choose them, Larry. I choose to love them and protect them. I choose to stop caring for you and supporting you. I choose to look you in the face and tell you that you hurt us, you hurt me. I hope you will see it from me in my eyes today that I believed in you always until I couldn't anymore. I hope you cry like we cry. I hope you feel bad for what you've done. I hope more than anything, each day these girls can feel less pain. I hope you want that for us, but this is goodbye to you, Larry, and this time it's time for me to close the door. It's time for me to stand up for these little girls and not stand behind you anymore, Larry....Goodbye, Larry. May God bless your dark, broken soul.

This is the statement that made Larry Nassar openly sob in court. You can hear the rest of Gonczar's story and many others' in HBO's At The Heart of Gold May 3 at 8 PM ET.