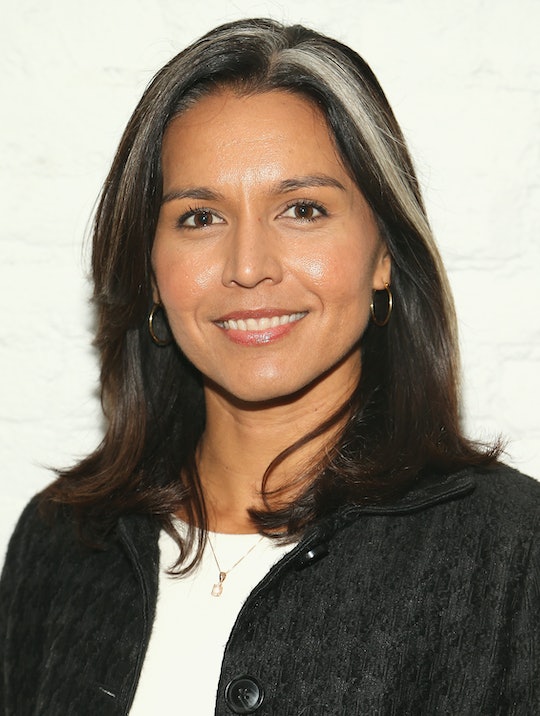 Who Is Tulsi Gabbard? She Recently Announced She's Running For President

Although the government is still in a partial shutdown, that doesn't stop the rest of the political world from continuing to chug along. It's possible to have forgotten due to the current political climate, but the 2020 elections are only a year away. Recently, yet another new candidate announced their plans to run for presidential office. Now, people are wondering: who is Tulsi Gabbard? The elections are rapidly approaching, so it's time to start learning about the new candidates, some of whom you may not know much about.

Currently, Tulsi Gabbard is a member of Congress, serving Hawaii's 2nd congressional district. According to her website, Gabbard is a veteran that served two tours in the Middle East. Her website also noted she currently serves on the House Armed Services Committee and House Foreign Affairs Committee. She made headlines as the first Hindu member elected to Congress and is now aiming for the presidency.

On Friday, Jan. 11, Gabbard announced her plans to run for office during an interview on CNN's The Van Jones Show. She said, according to the outlet, "There are a lot of reasons for me to make this decision. There are a lot of challenges that are facing the American people ... There is one main issue central to the rest, and that is the issue of war and peace."

Gabbard plans to run as a Democrat and has already appointed Rania Batrice as her campaign manager, according to CNN. Batrice was the deputy campaign manager for Bernie Sanders in 2016, as Women In the World noted.

However, soon after Gabbard announced her campaign, some concerning past tweets and political stances have resurfaced. As reported by HuffPost, one key concern rests around some of Gabbard's past homophobic remarks. According to the outlet, she has previously publicly referred to the LGBT community and those who support same-sex marriage as "homosexual extremists."

Although some of Gabbard's politics have evolved since then, in a 2016 profile published in Ozy, reporter Sanjena Sathian noted that the congresswoman told her then that her views remained the same, but that she doesn't think it's politicians' jobs to force their beliefs on others. In 2017, a profile by Kelefa Sanneh in the New Yorker noted that "she is now pro-choice and pro-same-sex marriage" and that she reportedly apologized to LGBT activists in 2012.

In the past, Gabbard's use of the term "radical Islam" has also been noted by outlets. She has voted to make it harder for refugees from Iraq and Syria to enter the United States — one of only a few Democrats to do so, as reported by The Washington Post. Additionally, Gabbard has ties to controversial Indian Prime minister Narendra Modi.

With these issues coming to light, Gabbard seems to be positioned as a potentially controversial candidate in the 2020 elections. In addition to her main concerning surrounding "war and peace", Gabbard has listed criminal justice reform, climate change, and health care as key platform issues, as reported by Politico.

It will be interesting to see which other candidates announce their plans to run for presidency in 2020. So far, Gabbard joins a field already including Rep. John Delaney of Maryland, among others, according to Axios. On Saturday, Jan. 12, Julián Castro, a former mayor of San Antonio and former Housing and Urban Development Secretary, announced that he too will run. And on New Year's Eve, Massachusetts Sen. Elizabeth Warren announced she was forming an exploratory committee for a presidential run. Other possible candidates are expected to announce their decisions soon.