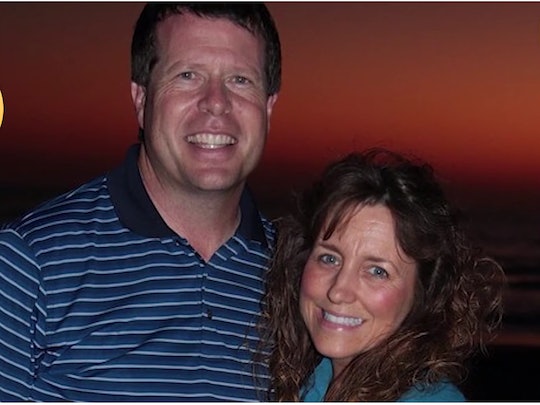 Who Is Tyler Duggar? Michelle & Jim Bob Have Expanded Their Family

Those who are familiar with Michelle and Jim Bob Duggar probably know the ultra-conservative couple has a whopping 19 children — thus, their former TLC series 19 Kids and Counting — whose names all begin with the letter "J." Although viewers don't get to see as much of Michelle and Jim Bob on their adult children's spin-off Counting On, they do make occasional appearances and manage to keep their fans updated via social media. Still, some people may not be aware the Duggar matriarch and patriarch officially welcomed their 20th child last month But who is Tyler Duggar? Because Michelle and Jim Bob have expanded their family.

Us Weekly reports Michelle and Jim Bob filed an emergency custody petition for then 8-year-old Tyler Hutchins on Aug. 26, 2016, and they were granted permanent custody on Nov. 21. 2016. Tyler, it turns out, is actually the son of Michelle's niece, Rachel, who is the daughter of Michelle's sister, Carolyn. If I lost you there, that makes Tyler their great-nephew. In Touch Weekly reports he was publicly introduced as a member of the family on the Duggar's Facebook account in February, when they celebrated his birthday. "Happy 9th Birthday Tyler! We are so glad to have you in our home and a part of our family!" the family wrote on Facebook. "Your bright smile and sweet spirit brings much joy to us all! Jackson loves having a "little brother/cousin" to ride bikes and play with and read your Bibles together." The post continued:

Our prayer is that each day you will seek God's will for your life, and that God will use your life in a great way.We pray over you that one of your first memory verses from the Bible will be lived out through your life! Isaiah 43:21 This people have I formed for myself; they shall shew forth my praise.

So how did Tyler end up in the Duggars' care, anyway? In Touch Weekly reports that his mother, Rachel Hutchins, gave birth to Tyler when she was a teenager. Originally, Rachel had given up custody of her son to her mother, Carolyn, in August 2015, the publication reports. "She's a good person, but she's made some bad decisions," a source told In Touch Weekly, of Rachel, who is on probation after being arrested in April 2015 for breaking and entering, according to the Daily Mail. Carolyn ended up suffering a stroke in July 2016 and was then unable to care for Tyler. Meanwhile, Rachel continued to struggle financially and legally. That's when Michelle and Jim Bob stepped in. Reportedly, Rachel supported the Duggars being named guardians of her son, according to the publication.

In the past, the Duggars had talked about adoption as a possibility for their family. (And so have at least two of their adult children, Jill Dillard and her husband Derick and Jessa Seewald and her husband Ben.) “We are open to the idea of adoption," Michelle told People back in 2013, after the family had visited an orphanage in China. "We are praying about it, and we will see what God has in store. Love for children has been placed on our hearts."

I think it's awesome that Michelle and Jim Bob were able to step in and help Tyler when his mother and grandmother were couldn't. (I mean, their house is certainly big enough for it!) Plus, what's one more kiddo when there are already 13 still living at home — Josh, Jill, Jessa, Jinger, Joy-Anna and Joseph are all married and living on their own — and grandchildren frequently visiting? Sure, the Duggars are a bit extreme with their religious views, dress codes and blatant sexism. But it's hard to deny Tyler is cared for loved greatly by his great-aunt and great-uncle.