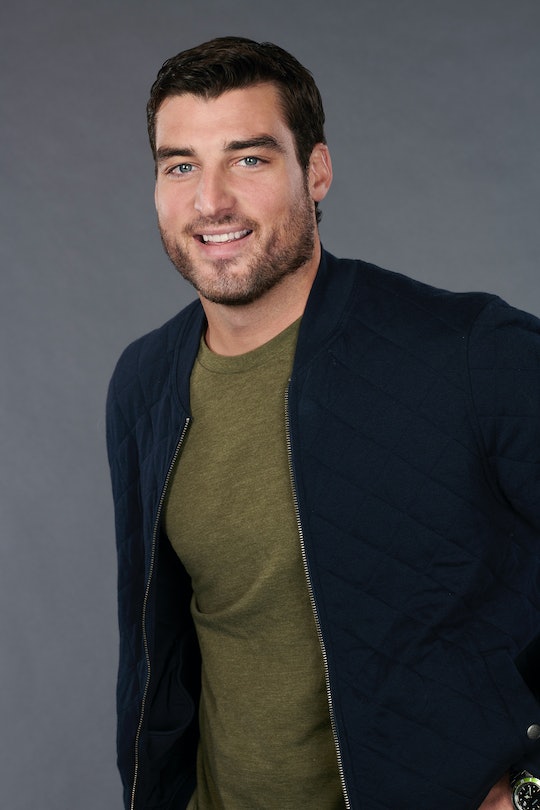 If You're A Cocktail Snob You'll Love This 'Bachelorette' Contestant's Bio

The Bachelorette's journey to find love is well underway, and the first date of Season 15 kicked off with a ride through the dirt. The lucky guy to get the first one-on-one time has already been compared to a "Jim Halpert" from The Office type, but that's hardly enough to build a relationship on. Now that you've seen him in action, who is Tyler G. on The Bachelorette? As one of two Tylers, this one has alcohol on the brain (in a good way).

Though you've only seen a small portion, Tyler Gwozdz (just Tyler G. to you), was a Spiked Seltzer salesman (A Connecticut-based company) and Psychology Grad Student from Boca Raton, Florida. Tyler G. was deemed the Beer Industry Influencer by Shared Spirits Marketing, where he commented on working with a new company that he became very passionate about. "Sometimes I can’t believe how lucky I was to be able to grow a brand with such a cool team," he said.

According to his ABC profile, describes himself as a "very laid-back guy with a go-with-the-flow kind of attitude," and also "avoids clubs at all costs and would much rather spend time reading, going to SoulCycle, or relaxing on his boat." Hannah's a girl of adventure, so he may have to reconcile a little of that introvert for her sake, but could otherwise be a good match. He does consider himself a "modern romantic" and is looking for "his equal match, who he says is a confident girl that isn't afraid to lay it all out on the table and is one that can make him laugh." OK, so maybe they're better matched than I previously thought. As far as life goals, Tyler G. wants to obtain a PhD in psychology with the goal of becoming a clinical psychologist with a side hustle analyzing dreams. Could all the answers lie in Hannah's dreams?

While all that sounds impressive enough, he doesn't let it define him. Actually, his gig at Anheuser-Busch InBev (he was the Regional Sales Manager) shows the guy also knows how to let loose. It's clear he likes the alcohol space. No judgements here, bro. His LinkedIn is a great snapshot of his career — from graduating Trinity College with a Bachelor's in economics, to the Seltzer thing, to the beer gig, and now his path to snagging a psych degree from Florida Atlantic University. He's on top of it; that's for sure. It's unclear what kind of work he's doing to make money now, because filming the show is time-consuming enough.

If you were to take a gander at Tyler G.'s Instagram, you'll see how much he loves promoting things liked SpikedSeltzer, as well as candid shots of him with family and friends. It looks like he knows how to have a good time, so the questions remains: will he stick around long enough for Hannah to see that?

Even after that first date with Tyler G., Hannah still has a lot of dudes to weed through. Considering what the former Miss Alabama USA went through as a contestant on The Bachelor last season, she's going to be picky, and rightfully so. She might want a guy just like Tyler G., or, she could choose the complete opposite. Regardless, Tyler G. seems to be the type to land on his feet. You can tell by looking through his Instagram photos. I have no doubt, no matter what happens, he'll be fine.

Now that you have a little more info on Tyler G., you won't confuse him with Tyler C. (I hope). And if you still do, well, join the club; there are a lot of men in that house.