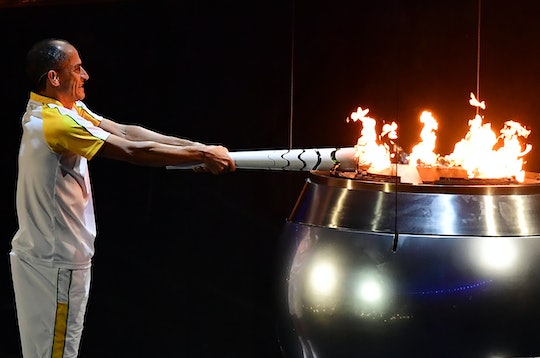 Who Is Vanderlei Cordeiro de Lima? He Lit The Olympic Cauldron At The Opening Ceremony

The Olympic opening ceremony is one of the best parts of the Olympic Games. From the parade of nations to the beautiful celebration of the host country, the Olympic Games are a mix of tradition and celebration, coming together to create something beautiful. One of the most important parts about the opening ceremony is the cauldron lighter — the one person in charge of bringing the Olympic torch to the ceremony and igniting the flames of the game. For those wondering, who is Vanderlei Cordeiro de Lima, they should know he was the cauldron lighter for the 2016 Rio Olympics.

The lighting of the Olympic cauldron is an tremendous honor. According to the Olympic Museum, the last torch lighter is selected by a committee for the "special relationship that they enjoy with their host country." Typically, they carry a "strong message" by bearing the torch. Therefore, it was no surprise that Vanderlei Cordeiro de Lima was selected to light the Olympic cauldron.

In spite of the torch's journey and being hand selected to carry the torch, Vanderlei Cordeiro de Lima has had a fantastic career as a Marathon runner and overcome great adversity in the process. While competing in the 2004 Athens Olympic Games, the International Association of Athletics Federations noted that De Lima was attacked by a spectator, Neil Horan. De Lima won the bronze in the event and not the expected gold medal, but by surviving the attack and persevering throughout the marathon, De Lima represents something more to the country of Brazil.

De Lima competed in his first Olympic games in 1996 in the Marathon event and continued to attend and represent the country of Brazil in the following games, including in 2004 when he was attacked. 2004 marked the end of De Lima's Olympic career but De Lima represents perseverance in Brazil and overcoming the odds, telling NBC Olympics about the attack:

From that moment, it was a matter of overcoming the odds. I was even shaking my head like that guy messed everything up for me. But quitting the race didn't once cross my mind.

[He has] a face that people remember. He's very involved in the community and with his non-profit organization. He's a role model, both inside the track and outside the track.

At the 2014 Sochi Winter Olympic games in 2014, two of Russia's most celebrated Olympians, Vladislav Tretyak and Irina Rodnina both lit the Olympic torch together. In 2012 at the London Summer Olympic games, the torch was lit by seven young British athletes to represent the "future" of the Olympics.

Apparently the people of Brazil love De Lima. According to NBC sports, Brazilians describe De Lima as "shy, simple and modest" — so it is only fitting that De Lima got his time to shine at the Opening Ceremony and show everyone, especially his country, that it is important to never give up.