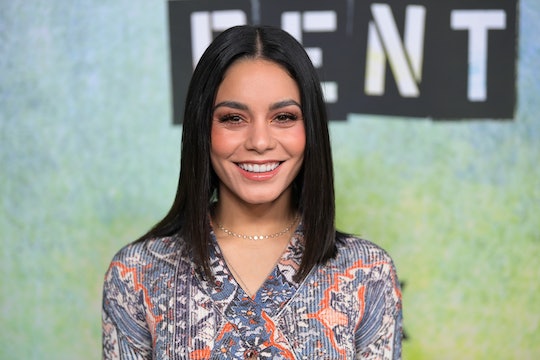 10 Fascinating Facts About Vanessa Hudgens, Who Stars As Maureen In 'Rent: Live'

A new live theater production is coming to television and it promises to be a spectacular event. As part of the cast, fans will get to appreciate an actress who hasn’t been seen for a bit since her star-making run in the 2000s. So, if you're wondering who Vanessa Hudgens is nowadays, here are some fast facts that show she’s a happy, earthy, and centered person despite being one of the world's biggest young stars.

Hudgens started performing when she was just a child, first in a Christmas musical and at age 7 in community theater, according to Parade. She soon began auditioning for commercials and TV shows and got enough steady work that her family moved to Los Angeles to support her career. At 16 years old she was cast in the High School Musical franchise that would change her life and introduce her to longtime boyfriend Zac Efron, according to E! News. The two were tabloid staples for several years, before going their separate ways, still remaining as tight-lipped about the breakup as they had about their entire relationship.

Now Hudgens is a successful film and television actress, a singer, and a Broadway star. Fans will see all those skills on display when Rent: Live hits screens on Jan. 27. Here are a few things you might not know about the bubbly star.

She Liked Being The Center of Attention

Really, what teenager doesn’t? When Hudgens was in the musical theater world in high school, she found the thrill of attention intoxicating, as she recently told The Cut.

“I grew up doing musical theatre and part of the reason I loved it was, of course, the shows and the music, but it was really about being on the stage and being the center of attention,” she told The Cut.

She’s drawing on that experience for part of her inspiration for the role of Maureen in Rent: Live.

This also isn’t Hudgens’ first time around with the material from Rent. She played the role of Mimi in a version of the production done at the Hollywood Bowl.

As for live television, she appeared with Julianne Hough and Aaron Tveit in the live production of Grease, in the role of Rizzo, according to INSIDER.

In 2017, the actress told HuffPost that she loves being awake before everyone else so she can get started on her day. After a couple smacks of the snooze alarm, she tried to wake up quickly and start her day off by listing gratitudes. As she told the outlet, she takes a quick peek at her emails and schedule before donning workout clothes and heading out to an exercise class. And, like so many of us, she’s a big fan of that morning coffee.

She Lost A Parent To Cancer

The night before Grease: Live was to be performed Hudgens’ father lost his battle with stage four cancer, according to People. She credits the cast and crew with getting her through the production. “I dedicated my performance to my dad because I knew he was up there in heaven looking down on me as proud as can be,” she told the magazine. She participates with a nonprofit called I Am A Dancer Against Cancer.

She’s A Fan Of Intermittent Fasting

The eating cycle, which involves a short period of eating each day with a longer period of fasting, came into Hudgens’ life through a friend, according to Women’s Health. Noting how energetic he seemed to be, she decided to try the plan for herself. “He [was] literally pulling a Benjamin Button. Homebody [was] aging backward!” She liked it so much she’s kept it up — to feel healthier, not for weigh loss, as she explained to the publication.

Her Superpower Would Be…

Hudgens starred in the short-lived TV show Powerless about superheroes with ordinary lives, according to Variety. So when HuffPost asked what superpower she would choose, it's not entirely surprising that she she said teleportation, so she could see the world without having to deal with airports.

She Forgot Her First Kiss With Zac Efron

Hudgens played Efron’s love interest for three High School Musical movies. When a reporter mentioned to the pair that they didn’t share a kiss in the first movie of the series, the two actors will startled to hear that they had locked lips, according to People. The director, Kenny Ortega, was also present at the interview and told them that they had indeed filmed a kiss, but that he’d decided to cut it from the final film, according to People, and apparently neither of them remembered the moment.

She Was Once "On The Fence" About Feminism

In an interview for her role in Broadway’s Gigi, Hudgens told The New York Times that she was unsettled about feminism for some time, saying:

I used to be on the fence about it. Just because I feel like it gets to a certain place where it almost has the reverse effect, where it’s so overpowering and so aggressive that it’s like rather than just standing up for female pride and female rights, it becomes, like, "I am the man."

As she told The New York Times, though, she found herself inspired by a new generation of feminists however: “But now I feel like there’s this new wave of feminists coming up that are truly about equal rights for women. I mean, Beyoncé is, like, killing the game, and I love her.”

She Threw A Themed Birthday Party

For Hugdens' 30th birthday party in December 2018, she celebrated with a Middle Earth themed bash, as People reported, adding that the guests sat on pillows placed on rugs in an environment festooned with candles, paper lanterns, and tents. Hudgens wore a very Arwen-inspired red gown and a silver crown, as she shared photos of on Instagram.

She’s A Big Believer In Fitness

Hudgens has said she’ll try to take time every night to plan out what she’s going to do for fitness the next day, according to StyleCaster, telling the site:

I feel like fitness is a really big thing in my life and a really amazing thing for self-care. In order to make sure I find time for that type of care, I like to take time every night to figure out what I’m doing for the next morning and try to build fitness into the next day, no matter what time that may have to be, whether it’s a 7 a.m. class or whether I can do it a little bit later.

Her favorite? Yoga, which she’s been practicing for 13 years, according to StyleCaster.

Be sure to look for Hudgens and the rest of the talented cast in Rent: Live on FOX on Sunday, Jan. 27 at 8 p.m. EST.