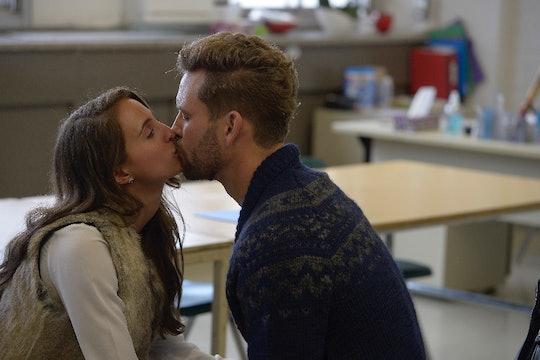 Yes, it's that time already in Bachelor Nation: hometown visits. On Monday night's episode, Nick ventured all the way to Montreal to meet Vanessa's family – and they're not letting him off easy. Apparently, Vanessa's been brokenhearted before, and her family is hellbent on not letting that happen again. One family member we meet is Vanessa's brother, Patrick, was at the forefront. While her sister warned Nick not to hurt Vanessa, Patrick was talking to Vanessa herself about her future with Nick. Who is Vanessa's brother on The Bachelor? He's super protective of her.

It's pretty safe to say that all the families that Nick visited needed a little convincing when they first met him. It makes sense; they are on reality TV after all, and their daughters have been dating Nick for all of six weeks (and sharing him, no less). Nick and Vanessa's hometown visit starts out great – before they go meet her family. They instead start out going to her work, a special education school. Vanessa's students loved Nick...but her family? Less so. Vanessa's parents are divorced, so they went to her mom and dad's separately. Both were unsure of what to think about Nick. This is not only because of Nick and Vanessa's bizarre situation, but because of Vanessa's past.

Vanessa's siblings were at her mother's house when Nick arrived. As Vanessa's sister took Nick aside to discuss her past relationship, Patrick talked to Vanessa herself about what this all means. He evidently cares a lot, and doesn't want to see her get hurt again. Vanessa said that she and her brother don't have these conversations often, but we can tell that they're close. In fact, Patrick made appearances on Vanessa's Instagram way back when:

In this post, he cooked for her while she was sick. So sweet! It's no wonder that he's worried about what will happen after the Bachelor cameras go away — if Nick sends Vanessa home, but if Nick proposes to her as well. We know that Vanessa's a frontrunner (especially since it's been revealed that Rachel is The Bachelorette), so these conversations are pretty valid. When Nick visited Vanessa's father, he gave him his blessing to propose — after a little convincing, though. He, like Patrick, was hesitant. Whether they have reason to be nervous about what's going to happen with Nick and Vanessa, we just have to see what happens after hometowns.