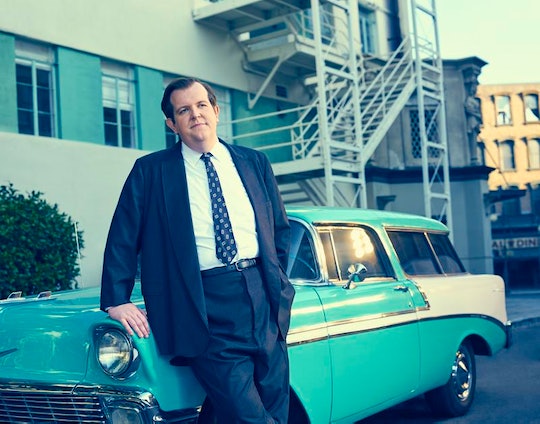 'Feud' Will Introduce Another Hollywood Star

While the titular feud on the inaugural season of Ryan Murphy's new FX anthology revolves around Bette Davis and Joan Crawford's catty brawls amidst their middle-aged career slump, Feud is supported by several influential figures during the filming of Whatever Happened To Baby Jane?, which is the story Murphy tackles. Among them is studio head Jack Warner (played by Stanley Tucci), Baby Jane director Robert Aldrich (played by Alfred Molina), and Victor Buono (played by Dominic Burgess). So who is Victor Buono on Feud? He's the actor who was nominated for an Oscar alongside his costar Bette Davis for his work on the movie.

Buono was a heavyset Shakespearean actor who, because of his size and deeply resonant voice, made a name for himself playing character roles at the Old Globe Theater in San Diego. In 1959, he was scouted by Warner Bros. and cast as various villains on several TV shows, before landing the role of Edwin Flagg, the accompanist in Whatever Happened To Baby Jane? He went on to earn a Best Supporting Actor Oscar nomination and a Golden Globe nomination for his work. Bette Davis was also nominated for an Academy Award for her work on Whatever Happened To Baby Jane?, but in a cruel twist, her arch nemesis Joan Crawford — who wasn't even nominated! — ended up on stage accepting the award on behalf of winner Anne Bancroft.

Buono went on to play the villain King Tut in the 1960s Batman television series. He also released a series of comedy albums and comedic poetry before his untimely death at age 43, brought on by a heart attack. Murphy uses the actor as a cunning plot device to explore the realities of queer film stars of the era. Buono was ostensibly in the glass closet, although he broke the mold by openly living with same-sex partners. At the same time, he understandably refused to discuss his sexuality in interviews and would set himself up as hypothetically straight when he dodged questions. According to The Hollywood Reporter, Buono's character also "smartly [weaves] in Davis' treasured ties to the gay community," which made up a significant chunk of her fanbase, especially as her manipulation-filled rivalry with Joan Crawford snowballed to deliciously dramatic proportions.

As for Burgess, THR additionally noted that the British actor tackles the role with "uncanny precision." He's most recently enjoyed guest stints on The Magicians, Gilmore Girls: A Year In the Life, The Good Place, and the Emmy-winning 2016 Roots reboot. He makes his debut on Feud as Victor Buono in the series' second episode, airing Sunday, March 12 at 10 p.m. ET on FX.