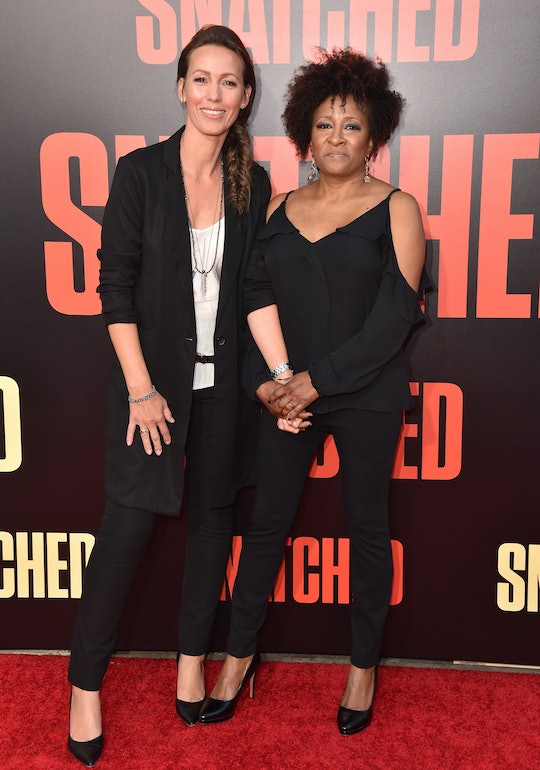 Wanda Sykes Talks About Her Wife In Her New Netflix Special

Wanda Sykes will return to Netflix this month with a new comedy special titled Not Normal. In it, the Emmy Award-winning comedian takes on everything from politics to family life, and she's not too proud to make fun of her own parenting. But viewers tuning in may be wondering who Wanda Sykes' wife is. Alex Niedbalski and Sykes boast quite the meet-cute.

They met in 2006, when Sykes spotted her on a ferry ride to Fire Island. She tells The Guardian that Niedbalski was carrying a computer bag and hanging out with a baby, and she realized just by looking at her that she was craving more stability. "Something really said to me — like, audibly — 'Wow, that’s what you need, Wanda,'" she said. Sykes happened to be remodeling her kitchen at the time, and the friends who she was vacationing with teased that if she wanted to pick someone up, she'd have to stop leading with boring remodel talk. To get back at her friends for the dig, Sykes immediately launched into telling the next person she met all about her kitchen, and, as it happened, that person introduced her to a friend who sold granite countertops. The friend was the woman from the ferry!

Niedbalski turned out to be both French and single, and she and Sykes hit it off. They got married in 2008, a month before Sykes publicly came out at a same-sex marriage rally in Las Vegas protesting Proposition 8. (She had previously been married to record producer Dave Hall from 1991-1998.) In an interview with the New York Times Magazine, Sykes acknowledged that the relationship jokes she made earlier in her career were more caustic than the ones she makes now, saying:

It just speaks to being in a bad relationship with my husband. I was being honest. I wanted to get away. Like: "God, there’s his stupid face, and he’s chewing. Ugh, does he have to breathe? Make him stop breathing." Now I’m in a great relationship, and I’m happy, so my wife’s chewing doesn’t annoy me.

In 2009, Niedbalski gave birth to twins, Lucas Claude and Olivia Lou, who are now bilingual. The family currently splits their time between Los Angeles and suburban Philadelphia. Sykes' kids are both white, and the family's racial dynamic feature prominently in Sykes' comedy, where she's unafraid to address the tension of how the world perceives black moms versus white moms.

In a 2015 interview with the Windsor Star, Sykes explained, for example, that she tends not to question doctors in the same way that her wife — who comes from a country with free healthcare — does. "If I did and something went wrong, you know they’re not going to blame the white French lady," she joked. "It’d be the black mama they’d blame! In France, they’d be breaking out the guillotine!"

Sykes isn't afraid to address the cultural differences within her immediate family in her special in a way that is both hilarious and relatable. After all — who hasn't argued with their partner about the best way to parent from time to time?

Wanda Sykes: Not Normal is now streaming on Netflix.