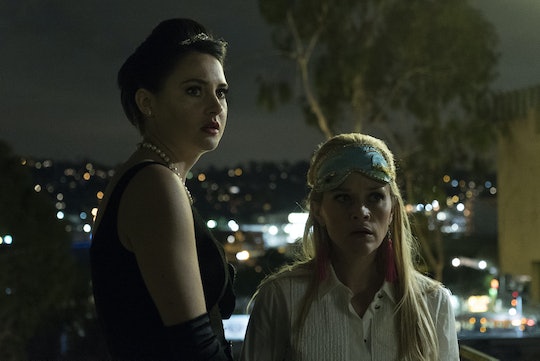 The 'Big Little Lies' Finale Left Things Up In The Air

Warning: spoilers from the finale ahead! With Sunday's episode, "You Get What You Need," Big Little Lies comes to an end. This season, anyway. It's currently up in the air as to whether the show will get a second season, and that's a good thing: the finale left us with a few questions. As in Liane Moriarty's novel, loose ends are tied up as to whom the Trivia Night victim and murderer are. In the final scene, though, we see a figure watching the main characters from afar. Who is watching the women at the end of Big Little Lies? The Monterey drama doesn't seem to be completely over just yet.

The crux of the series, as in the novel, is the mystery over the players of the Trivia Night killing. Throughout both we see interrogations of minor characters and occasionally detectives doling out parcels of information. In the finale, the mystery is finally solved: Perry is murdered after a confrontation with the women, with Bonnie shoving him off the school steps. A murder investigation was launched, but the women kept quiet about the truth. Perry not only abused Celeste, but he raped Jane years ago, so it's no wonder they didn't want to press charges. No one ended up getting prosecuted, and the detectives seemed skeptical.

After Trivia Night, police attempted to find out how Perry died, but the women wouldn't budge. One detective could tell that it wasn't an accident, that Perry abused Celeste and he was pushed. The other detective argued that if it was self-defense, Celeste would be charged with involuntary manslaughter and be in prison a short time. Why, then, would they lie about what happened? "That's what's bugging me," the detective said. "Why lie?"

Throughout the final scenes, there are long shots that end with a click of a lighter, including the last shot. We've seen the detective light up a cigarette, so we can assume she's the one watching. (Plus she had a habit of opening and shutting the lighter all throughout the season as a telling habit.) Why is this detective spying on the group though? She figured out the truth — or most of it, anyway. She doesn't know it was Bonnie who really pushed Perry, and she doesn't know that Perry was Jane's rapist. She may know that the women are hiding something, and wants to find out what.

Perhaps this is a sign that Big Little Lies may have another season coming. The detective may not let this case go — or, these women could get in more trouble. Even if the series remains limited, though, the last few shots remain true to the haunting nature of the series. Like the detective, the characters' pasts may follow them despite the outwardly happy ending.