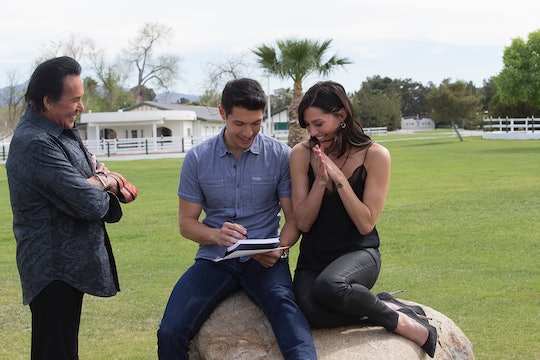 The Next Guest Star On 'The Bachelorette' Is A Certified Icon

According to Newton's official website, he's a Las Vegas legend. His show features "performances of his favorite hits, showbiz stories, and candid conversation with questions from the audience." He started singing as a child, performing with his older brother, and he started performing solo in the 1960s. He's known as The Midnight Idol, Mr. Las Vegas, and Mr. Entertainment — so he's kind of a big deal. Wayne Newton's best known songs are 1963's "Danke Schoen," 1972's "Daddy Don't You Walk So Fast," and 1980's "Years."

What does this have to do with The Bachelorette? Well, Newton is a guest star this episode, and I'm sure it has something to do with helping out the contestants with his songwriting talents — as Richard Marx did for Becca and Chris in an earlier episode. According to Broadway World, the contestants will visit Newton's Casa De Shenandoah on a group date where the legendary singer and songwriter lives with his wife, Kathleen.

Though beloved as a performer, Mr. Las Vegas's life has not been without some controversy. In 1992 he filed a $20 million Chapter 11 bankruptcy. But seven years later he became the city's highest paid performer. In 2005, though, the financial troubles returned. The IRS sued Newton and his wife for $1.8 million in taxes and penalties from 1997 to 2000. They released a statement at the time saying, "We have paid millions of dollars in taxes, so obviously it is not a matter of money but a matter of principle."

Most recently, the Newtons were in the news because they scared a burglar off their Las Vegas home. Apparently, two thieves fled the scene when they arrived home from Newton’s show at Windows Showroom at Bally’s hotel and casino. "We are grateful for the officers’ fast response and attention to this incident,” Newton and his wife told the Las Vegas Review-Journal. "We are confident that our home surveillance video will lead to the apprehension and arrest of these individuals." Following the attempted break-in, Newton and his wife added extra security to their home.

The Bachelor franchises are sometimes teased for so often featuring dates with fairly unknown country stars serenading the couple as they slow-dance in a (usually) empty bar. From the looks of the musical guest stars on Becca's season which include Lil Jon, Richard Marx, and now Wayne Newton, the show has decided to broaden its horizons slightly. I, for one, am thrilled to see a wider variety of guests on the show — especially when those guests are such icons in the music world.

Just like how Chris had to write a love song to Becca in Episode 3 with the help of Richard Marx, I imagine that the Bachelorette suitors will be writing some song lyrics to Becca to express their feelings during this date with Newton.

But even if they don't, I have my fingers crossed for a live performance of the crooner's classic song, "Danke Schoen." From the previews, it looks like this episode will also see the season's first two-on-one date with David and Jordan, as well as Becca's one-on-one date with Colton. I really can't decide at this point which date I'm most excited to see.

Whatever happens in the rest of the episode, it looks like the Wayne Newton group date will be everything I love about The Bachelorette: fun and slightly cheesy entertainment.