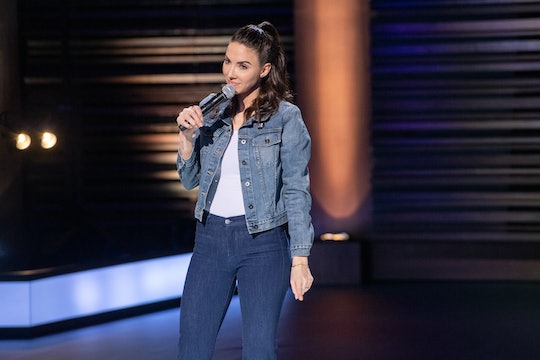 In her new Netflix special, Can I Touch It?, comedian Whitney Cummings covers sexual harassment, the #MeToo movement, and the nuances of sexual relationships. When talking about the future of sex, she introduces the audience to the look-alike sex robot she gifted her fiancé. She talks about him quite a bit in this stand-up special, so you may be curious to know who Whitney Cummings’ fiancé is and how they met.

As reported by People, Cummings got engaged to her longtime boyfriend Miles Skinner on her birthday last year. In a series of Instagram posts, the comedian shared the couples’ happy moments, including a video of the surprise proposal. “Today I got engaged,” she captioned the clip. “I handled it great! This just goes to show that if you work on yourself, trust your gut, and keep your ego in check you too can find love on a dating app.”

According to his Linkedin page, Skinner is the Executive Creative Director of Special Projects at VICE Media who describes himself as an “idealist and an imperfectionist.” After studying communication and media at the Parsons School of Design, Skinner worked with a number of big brands — including Nike, Adidas, Jockey, The New York Knicks, Rolls Royce, Ralph Lauren, and PepsiCo — before joining VICE Media.

Cummings doesn’t go into much detail about Skinner in her media interviews, but last December, she did reveal that the two are in the process of planning their wedding. When talking to ET, the comedian revealed her love for animals and said that she was scouting different animal-centric wedding venues around the country while on tour. “I really want to do my wedding at a place that’s like a sanctuary or rescue to sort of help draw attention to one,” she told the outlet. “So that everyone can tag it and post it and spread awareness about a rescue that might need some attention.”

She also admitted that she plans on having her own animals in her wedding, and how it’s something Skinner would just have to deal with. “My fiancé is just gonna have to deal with me walking down the aisle with nine horses like a queen,” she told ET, while noting her pig will take center stage. “My fiancé is the ring bearer, and I’m marrying the pig.”

Cummings hasn’t shared many pics of Skinner on Instagram recently, but I’m sure she’ll post some of the wedding when it happens. In the meantime, fans can hear exactly how she feels about him in her new comedy special, which is currently streaming on Netflix.