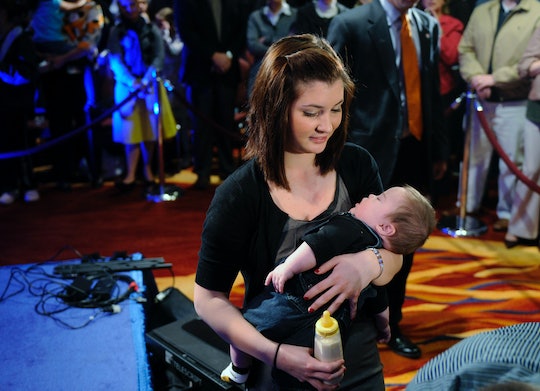 Sarah Palin's 24-year-old daughter, Willow, just announced that she's expecting two bundles of joy. That's right, the daughter of the former Alaska governor is pregnant with not one, but two babies, as she recently shared on Instagram. Though she lives a significantly more private life than her sister Bristol, who appeared on Teen Mom OG and is often making headlines, some are still likely curious about the mom-to-be's life, specifically her other half. So, who is Willow Palin's husband and how long have they been together?

Willow and her hubby, Ricky Bailey, have been married since September 2018, according to E! News, following a nine month engagement. And since then, the couple, who currently live together in Alaska, has wasted no time diving into married life and starting a family, or so it seems.

On Monday, Palin announced to her Instagram followers that she and Bailey will soon welcome "TWO little babies into this world!" She also revealed in her announcement that the children — their first! — will arrive in December, meaning she's about three months along at this point.

The couple hasn't said any more details about their upcoming bundles of joy at this time, like the sex or possible name ideas, but hopefully they'll share more with their followers as Palin's pregnancy progresses.

Instagram reveals seem to a theme with the happy couple. Back in 2018, Palin also confirmed her wedding to Bailey on social media, as TODAY reported at the time, posting a photo of herself and her husband sharing a kiss at their table during the wedding.

"The most perfect day," she captioned the photo.

Before they got hitched, the couple had dated for about four years, according to the New York Daily News, and Bailey eventually popped the question in December 2017 in New York City, as UPI reported.

Though some of the Palins are in the spotlight, Willow's other half tends to stay out of it more than other Palin suitors, including Bristol Palin's exes Dakota Meyers and Levi Johnston. Bailey's social media pages are private, which makes it a bit difficult to really get a feel for who he is and what he does in his free time.

The dad-to-be does, however, occasionally appear on his wife's Instagram, with the pair enjoying the outdoors in Alaska, or vacationing together. In October, for instance, the couple jetted off to Hawaii together for a trip, which Palin shared a number of on Instagram, calling her husband her "favorite person in the whole world."

In other IG posts, Bailey appears to enjoy outdoor adventures, and is often pictured outside with his wife on the water or in the Alaskan wilderness.

Bailey is 32 years old, making him a bit older than Palin; she's 24 years old. It appears, based on some older posts on Palin's Instagram, that both she and Bailey are avid Trump supporters. In fact, for Halloween, the pair dressed up in American flag garb, for a photo she captioned, "'Merica," along with the hashtags "#trumppence2016" and "#trumptrain."

Little information about Bailey is easily available at this time, but it appears that he and Willow Palin are very happy together and are looking forward to welcoming their twins into the world.