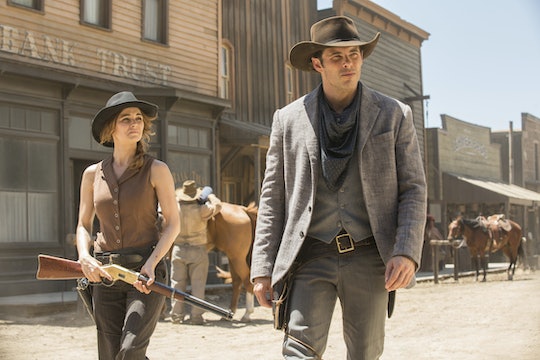 Who Is Wyatt On 'Westworld'? There Could Be More To Teddy's Foe Than Meets The Eye

"The Stray," Westworld's third episode, introduced several new characters who will undoubtedly be important figures in the future. One was the titular "stray," a rogue robot whose violently aberrant glitchy behavior Stubbs and Elsie to go into the park firsthand. Another character was Wyatt, who we arguably know the least about. The villainous host's sudden, half-complete introduction begs the question of exactly who Wyatt is on Westworld – and whether his importance goes beyond what we've been told.

Teddy, who was programmed to love Dolores, was also programmed to never run away with her – an effort to keep both of the robots in town and near Dolores' farm, so that she would be "available" to any of the guests (like the Man in Black) or hosts that chose to have their way with her.

"The Stray" explored why Teddy's programmed backstory prevented him from running away with Dolores, who has been more insistent on escaping the town together since she has begun glitching and being more self-aware. Every time Dolores asked Teddy to go away with her, he responded with "someday" – something Dolores, who is increasingly more conscious than Teddy, recognized as really meaning "never." Teddy's reasoning for being unable to leave was a need to atone for his "dark past," and for the person he'd been before he met her.

Add in the fact that the guests and fellow hosts really, really love to kill Teddy and, well, these two are probably never riding off into the sunset together. Sorry, Teddy.

A "conversation" between Ford and Teddy, when the former was running a diagnostic on the latter, revealed that Teddy never even got an actual backstory. Instead, Ford gave him a "formless guilt" with no root cause that could, therefore, never be assuaged – poor Teddy would forever feel the need to atone but actually had never been programmed to have anything to atone for. On "The Stray," Ford finally invented that backstory for Teddy – a foe named Wyatt, who had been a sergeant and Teddy's superior during his time in the army, before Wyatt went mad.

We've yet to see Wyatt in person in the present, but in Teddy's flashback he appeared to be a violent megalomaniac, who slaughtered a bunch of innocent people and believed that their world was his for the taking. At some point, Wyatt escaped and evaded Teddy before the latter could bring him to justice, making him Teddy's "unfinished business" from the past. Effectively, Wyatt, courtesy of Ford, is now the only thing standing between Teddy and Dolores' happily ever after. Unfortunately for Teddy, Wyatt has surrounded himself with a band of murderous men, who attacked his group up in the mountains and literally hacked Teddy to pieces while he was in pursuit of Wyatt. So, it's not going to be all that easy for Teddy to deal with Wyatt.

Of course, this begs one serious question: Why did Ford decide that now was the time to finally give Teddy a clear purpose? The simplest answer to this is that Wyatt is much more important than he appears – to Ford, in particular.

We've already gotten several hints that Ford is up to something strange. His conversation with the little boy host – who seemed to possibly be a robotic replica of Ford himself as a child – and the reveal of his new, mysterious chapel-based storyline in the works on Episode 2 gave us the idea that all might not be as it appears with Ford's agenda. Now, Ford has introduced a very particular foe to set Teddy after. The most obvious reason for Ford to do this? So that Teddy will get rid of Wyatt for him.

But that still leaves unexplained why Ford would need so badly to get rid of this random Wyatt character and not be able to handle it himself. One theory for Wyatt's identity would explain this – that Wyatt is actually Arnold, Ford's former partner who was said to have died in Westworld years ago.

Ford and Arnold were at odds over whether to encourage consciousness in the robots. Ford was of the mindset that the robots are inhuman and therefore not conscious – the best way for them to be, in order to deal with all of the atrocities committed against them day after day. Arnold, on the other hand, wanted to actually create consciousness.

If Arnold didn't actually die in Westworld (or, somehow, transferred his consciousness into that of a host), but somehow managed to evade everyone as a host named "Wyatt" – well, it stands to reason that there's bad enough blood between the two that Ford has to send Teddy to suss Wyatt out. What that bad blood is, we'll just need to wait to find out.