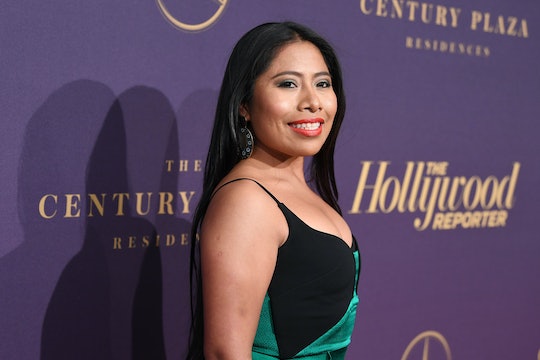 Who Is Yalitza Aparicio? The 'Roma' Star Never Planned On Being An Actor

If you're planning on tuning into the Oscars, then you've probably already peeked at the nomination list ahead of the big night. Which means you saw that a Netflix film titled Roma snagged an impressive number of nominations. I'm willing to bet that whether or not you've seen the movie for yourself, you've likely have never heard of the main actress before. So who is Yalitza Aparicio? As it turns out, the Roma star never planned on being an actor.

As Variety reported, Roma received a whopping 10 Oscar nominations — tying The Favourite for the top spot going into the Feb. 24 event. The Spanish-language drama — which is filmed entirely in black and white — is directed by Alfonso Cuarón and was released in select theaters in November and via Netflix in December. Roma is actually a district located in the Cuauhtémoc borough of Mexico City, where the movie is set, according to The Guardian. It takes place during the early '70s and follows an upper-middle-class family, including their maid/nanny, Cleo — who is played by Aparicio. As PopSugar explains, the story is depicted through Cleo's eyes, and focuses on her relationship with her employer, the family matriarch, Sofia.

Almost immediately after Roma dropped on Netflix, positive reviews starting pouring in. Check out the official trailer, below.

The most surprising thing about Aparicio, 25, is Roma was her first-ever acting gig, according to Cosmopolitan. Not to mention she has no formal training. Like, at all. In fact, before snagging her role as Cleo, she was studying early childhood education and wasn't even pursuing a career in acting and, according to Cosmopolitan, only took the job because of the money. It was actually her sister who convinced her to show up to the casting call in the first place. Fast-forward to today, and she's the first indigenous woman and the second Mexican woman to receive a Best Actress Oscar nomination, as the Los Angeles Times reported. Pretty impressive, right?

As Aparicio told The Guardian, she saw a number of similarities between herself and her character, Cleo. "My life was similar. We were both poor, and we both wanted to go to Mexico City to improve our family’s lives," she told the publication. In fact, Aparicio's mother had worked as a nanny/maid. "She is still a domestic worker. When I was younger, I used to help her so she could finish earlier." Aparicio's mother actually raised her alone after her father left when she was a teen. Of her mother, she added:

I wanted to be like my mum; as strong as her. She was my role model. The film is like a tribute to women in general — these invisible women are always there in the home, taking care of the children.

I don't know about you, but this young woman's background — along with the story of how she landed the role of Cleo — is so inspiring to me. I'm definitely going to be looking for Yalitza Aparicio on the red carpet ahead of the Oscars on Sunday. And I hope to be clapping for her as she accepts an award (or a few) on stage!