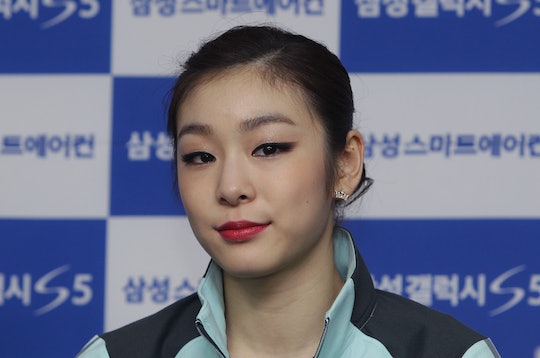 Who Is Yuna Kim? The Olympic Cauldron Lighter Has An * Impressive * Track Record

At the start of every Olympics season, the tradition of carrying the official Olympic flame from Greece to the host country and throughout ends with the ceremonial lighting of the cauldron. This time around, the person of honor was an Olympic gold medalist and former South Korean figure skater, but who is Yuna Kim? The Olympic cauldron lighter earned the honor of lighting the final flame to commemorate the true start of the 2018 Winter Games.

Typically, the individual who is given the honor of lighting the Olympic cauldron is a current or former athlete who has a certain status in the host country, and in Kim’s case, that seems to be accurate. Not only is she an honorary Olympic ambassador for South Korea, but she won both gold and silver Olympic medals in the 2010 and 2014 games, respectively. After bringing home her silver medal in 2014, the figure skater retired from the sport, but she still remains an important public figure in South Korea.

In November, Kim spoke as a South Korean goodwill ambassador at the United Nations General Assembly in New York. At the time, though there hadn’t been an official announcement of who was chosen to light the Olympic cauldron, she stated, "if given the opportunity, of course it would be an honor," according to NBC Sports.

The 27-year-old former Olympian may be retired from the sport, but she was always interested in competing in the Olympics since she was a child. "I first experienced the spirit of the Olympic Games and the power of sport when I was a 10-year-old watching the South and North Korean delegations walking into [the 2000] Olympic Stadium together," she revealed at the United Nations General Assembly, according to the Olympics website.

Although she hasn’t been active in figure skating since retiring in 2014, Kim Forbes named Kim one of the top earning Olympic athletes of 2010 — at the time she had earned almost $150,000 total in prize money and $7.5 million thanks to the numerous high profile sponsorships she received. Fans of figure skating in the United States might be familiar with names like Nancy Kerrigan and Tonya Harding, but in the Olympic figure skating world overall, Kim is still well-known for her signature moves. There’s even a popular bent over camel spin that’s often referred to as the Yuna Spin.

Because of Kim’s accomplishments as a figure skater, she was given the honor of being a goodwill ambassador, or honorary ambassador meant to promote the event, for South Korea for the 2018 Winter Olympics, but it was likely also because of her personal work with UNICEF. As a goodwill ambassador for the global non-profit organization as well, Kim donated and worked to raise money for victims of the 2010 Haiti earthquake, and in 2015 announced her goal to continue fighting for impoverished children, gender equality, and eradication of diseases.

During her time as a figure skater in the Olympics, Kim earned scores that would still place her among the top highest point earners today. At the 2010 Olympics, she earned a total score of 228.56, and, to put that into perspective, the highest earning female figure skater as of 2017 is Russian figure skater Evgenia Medvedeva, who earned 241.32 points at the 2017 2017 World Team Trophy competition.

Being the Olympic cauldron lighter is a great honor for whomever is chosen to carry out the task and in this case, Kim no doubt earned the right to be able to do so at the Winter Games. Because of her experience and status as something of a living legend in South Korea, she’s been a steady fixture in the Olympics even after her official retirement. Taking part in lighting the Olympic cauldron was the perfect way to honor her achievements and dedication to her country.