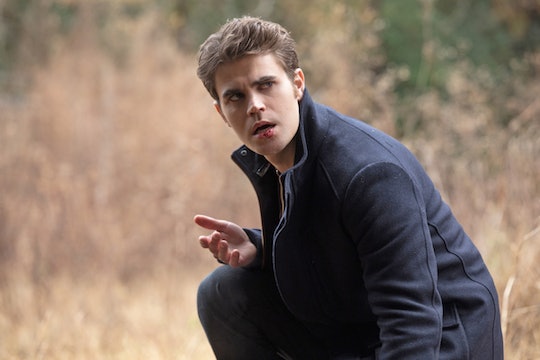 Stefan's In Big Trouble On 'The Vampire Diaries'

Poor Stefan. As if he didn't already have enough on his plate now that his humanity has returned, but now he's also apparently been abducted by an assailant. So who kidnapped Stefan on The Vampire Diaries? His list of enemies is pretty long these days. He's been human for less than 24 hours and he's already been arrested, nearly killed, and now tasered by someone, so yeah — this whole "human" thing isn't working out so well for Stefan right now. (Just wait until he has to wait in line the DMV.) Anyway, the point is that life is kinda sucking right now, but I have a feeling things are about to get much worse for him.

One thought that comes to mind is that Sybil is to blame here. She has a stake in this whole Maxwell bell thing and maybe she thinks holding Stefan hostage will help her get the gang's attention and enlist their help. But then I remembered that Cade had killed her last week. But then again, now that we have Kai walking around like nothing happened, I'd say anything is possible at this point. At the same time, though, since Kai has managed to come back to the land of the living, that opens the doors to number other suspects as well.

As this particular Twitter user suggests, it's also possible that Katherine has managed to slip through the divide as well. And given her longstanding history with Stefan, she may want an update on everything she's missed. Plus, if you're going to bring back the acting skills of Nina Dobrev, why not take full advantage of the opportunity? If I were Julie Plec, I wouldn't just bring back Elena — I'd bring back her evil doppelgänger who is arguably just as lovable as Miss Gilbert herself.

Then again, maybe it's Bonnie's mom, Enzo, or even Bonnie herself. Basically, the list of possibilities are endless, but I have a feeling we won't need to wait long to know for sure who is truly behind the mask. But considering Damon has his hands full at the moment with Kai's return, it may be a while before anyone realizes Stefan has gone missing. Let's just hope that whoever has taken him will be careful with their cargo. He is human now, after all.