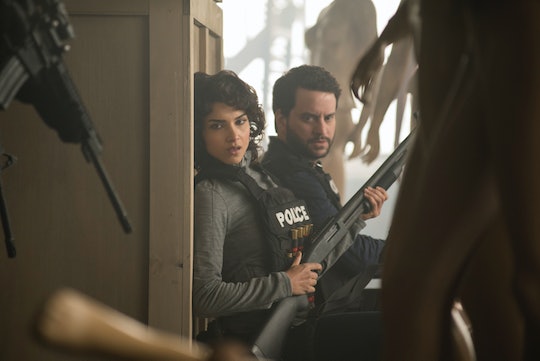 'The Punisher Delves Into Frank Castle's Dark Past

Like most of the Marvel Netflix series, The Punisher includes a number of flashbacks that give insight to Frank Castle's past. Through the video he received from Micro, viewers saw how Dinah Madani's friend, Ahmad, was killed, but his killers were wearing masks. So who killed Ahmad in The Punisher? Warning: spoilers ahead for Episode 2!

Similar to Frank, Dinah also served in the military, but unlike Frank, when she returned stateside it was against her will and she ended up working for Homeland Security, mainly so that she could find out what happened to her friend. Ahmad was a native in the country Dinah was serving in and it was she who brought him to American forces, and promised him he'd be save. Unfortunately, that obviously wasn't true.

In the video Micro sent Frank, Ahmad is shown being tied up, as men in masks berate him and ask him questions, until finally someone is ordered to kill him and does so right then and there. Based on the fact that the video was sent to Frank and given his reaction, it seems fair to assume that it's Frank and the Special Forces unit that he served with who are in the masks. Moreover, it may have been Frank that pulled the trigger, though I somehow doubt it. However, I bet he was in the room.

But who exactly are these men and why did they kill Ahmad? This definitely seems like part of the conspiracy that led to the deaths of Frank's family and sent Micro into hiding, but what does it all mean? It's unclear right now, but Billy Russo definitely seems to be a part of it. He was best friends with Frank when they were in the Special Forces together and has since then founded a private military corporation called Anvil. Dinah has smartly gotten close to him in the hopes of getting some further intel, but if she's not careful she could end getting in way over her head.

Another crucial piece in this mystery is Rawlins, who hasn't been seen on the show just yet, but appeared in the trailer. It looked like Rawlins was Frank and Billy's commanding officer, and he obviously wants Frank dead, as he's the last person who knows what they did (presumably killing Ahmed, but possibly something else). It's unclear who exactly he's speaking to in the trailer but I would guess it's Billy, who may still be working with Rawlins. Billy is also seen walking away from a burning building with a duffel bag, which seems to hint at him possibly killing someone in the future.

There's obviously still a lot of questions that the show needs to answer, but there are still 11 episodes more to go, so the show is only just getting started. Plus, Frank has a good amount of people working with him. He has Micro, who it seems he may actually agree to work with, Karen, who has already used her resources at the paper to get Frank answers, and Curtis, though I'm not sure if he can be trusted. As much as I'd love to believe he really is a good guy, in one of the preview photos from the show he's seen with Billy, and one has to wonder what exactly they're talking about...

Besides Frank's methods of investigation, Dinah is also looking into the death of her friend, and whether they realize it or not, they're really on the same side. It's possible a team up could be in their future, but Dinah would have to bend the rules a bit in order to work with Frank, and she doesn't seem like a rule breaker. Then again, who knows?

You can see what happens next by watching The Punisher, which is now streaming on Netflix.