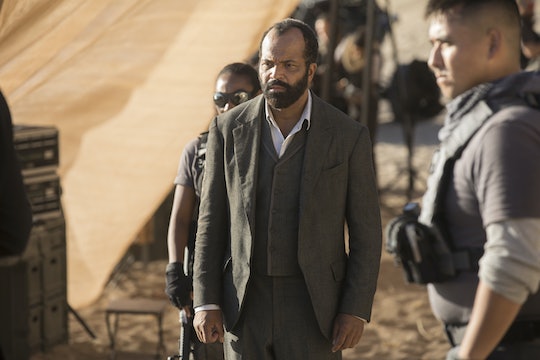 The 'Westworld' Season 2 Premiere Ended On An Ominous Note

Normally when it comes down to a battle between robots vs. humans, I'm usually prone to side with the humans. However, in the case of Westworld, I find myself rooting for the Hosts. They have been treated horribly by humans for many years and I'm all for seeing them get some justice. However, something apparently is going to go very wrong with Dolores' uprising if the Season 2 cliffhanger is any indication. So who killed all the Hosts on Westworld? Sunday night's episode definitely ended on an ominous note.

Once again, Westworld has introduced viewers to two different timelines. The first one seems to pick up shortly after the events of Season 1 with Dolores eager to lead the charge for a full-on Host domination, not just in the park, but throughout the world. (This woman is nothing if not ambitious.) Meanwhile, another separate timeline jumps roughly two weeks into the future, with Bernard waking up on a beach, confused about how exactly he got there. He's found by none other than Ashley Stubbs (who provides zero explanation about how he escaped his showdown with those Shadow Nation members) as well as Charlotte Hale, and newcomers Antoine Costa and Karl Strand. Their mission? Taking back the park from the Hosts.

Since there's only a two-week difference in these timelines, you'd think the Hosts would still have the upper-hand in all of this, but apparently not. Because when Bernard & Co. managed to locate where a large group of Hosts were congregating, what they ended up finding was nothing short of disturbing. Not only did the group come across a large body of water that shouldn't be there — they also found all of the Hosts floating on top of it, dead. This included poor, sweet Teddy Flood. (And yes, the irony of that name doesn't escape me.)

Karl was just as perplexed about the situation as viewers, wondering what could've happened to make all these robots seemingly "drop dead" for all intents and purposes. Bernard responded by saying, "I killed them. All of them." However, I would take that confession with a grain of salt. He could've meant that he just feels responsible without purposefully trying to kill the other Hosts. So what happened in the span of two weeks to wipe Dolores' army out? Could this be the work of Dolores herself? She was conveniently MIA during that scene, which means she may be the only survivor — or the one responsible for taking her comrades out.

I don't really know what Dolores' motive would be for doing something like that. You'd think that she'd want as many Hosts as possible around to rebel against the humans. Were the Hosts perhaps having a change of heart over her plan? She's definitely not the same Dolores viewers met in Season 1, so it's definitely possible that she's behind this. And we all know that she's certainly capable of murder. The fact that Teddy is involved in this could speak volumes as well. Maybe he felt Dolores was taking things too far and got all the Hosts to side with him. Or could he be the one who wiped them all out, including himself, thereby making the ultimate sacrifice for the greater good? That does sound like a very Teddy-like thing to do.

We won't know for sure what's going on until we get more information, but knowing what the future holds in store for all these Hosts, it's definitely going to make me look at the uprising a little differently.