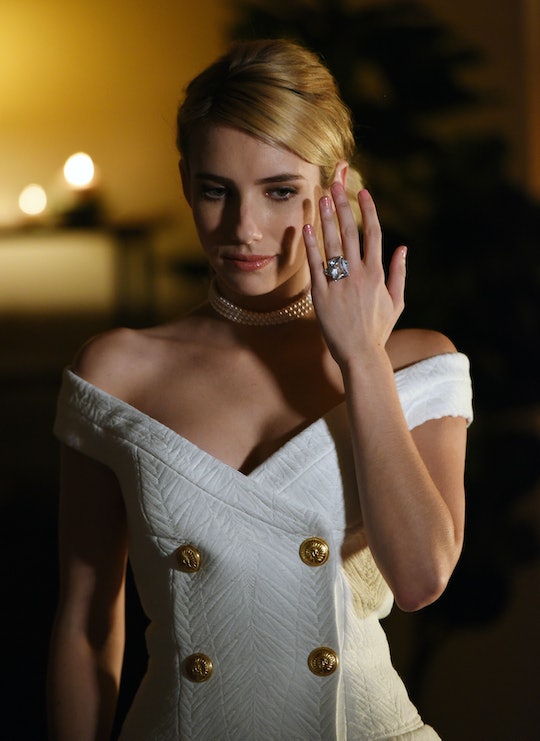 Who Killed Chad On 'Scream Queens'? It May Not Be Who You Think

Tuesday's episode was a dark day for fans of Scream Queens, and an especially dark day for Chanel Oberlin. Just as she was about to marry the rich kid of her dreams, his corpse fell from the ceiling and on to the altar, as could be expected from this kind of show. Who killed Chad on Scream Queens? While the obvious suspect would be Dr. Brock Holt, something Hester said makes me think it was the Green Meanie after all.

The fight between Dr. Holt and Chad Radwell over Chanel was kind of the B-plot in this episode, as the main romance was the one brewing between maybe vampire Dr. Cassidy and Chanel Number 3. However, the rivalry between the two got steadily more heated as the episode wore on, starting with mutual accusations of one of them being the Green Meanie, and eventually ending with Chad proposing to Chanel in the park with a Mariachi band and a very lengthy prenup. Not everyone's cup of tea, but Chanel seemed to dig it very much. Good thing she didn't see her other main squeeze looking on ominously from the sidelines. Chad was obviously worried that Brock and his murder hand were going to do him in, but was it really him in the end?

After asking him to be his best man at the wedding (why not?) Chad also asked Brock if he could help him tie his bow-tie. Brock surprisingly did not strangle Chad to death with the tie, and the crisis seemed averted. But that doesn't mean that he's not still a primary suspect Chad's murder. And I mean, did he really have to fall through the ceiling like that? That just seems mean.

Then again, while Denise and Zayday were questioning Hester, who was restrained in a very Hannibal-esque straight jacket, they demanded she tell them who the Green Meanie was before someone else was killed. Hester then cackled maniacally because, of course, someone else already had been killed. This means that somehow Hester knows when the Green Meanie has struck, and also implies that Chad was killed by the Green Meanie. According to Dean Munch's theory, the killer would have to be around 30 years old, ruling out Brock. But she could be wrong.

Luckily for Chanel, she already gave a long speech at the beginning of the episode about how she chooses herself over men. Hopefully this will get her through this very difficult time. I don't know what I'm going to do though...