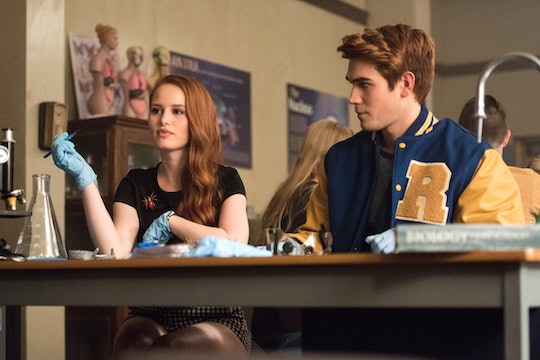 The 'Riverdale' Killer Is Still At Large

The CW's newest series Riverdale has finally made its official debut and already fans are filled with questions. But the biggest mystery that Season 1 is sure to focus on was made clear early on: who killed Jason Blossom on Riverdale? The premiere ended with Jason's body being found, and while initially his sister Cheryl had assured everyone that he had drowned while trying to retrieve her glove from the Sweetwater River, that bullet hole that was discovered in his head suggests otherwise. There was definitely so foul play at work here, but who's the guilty party? Obviously, it's more than likely going to take all season to answer that question, but the list of suspects, for the time being, is pretty extensive.

Considering the fact that viewers were never really given the chance to get to know Jason as a character — he died shortly after he was introduced — it's hard to say why someone would want to kill him. I mean, we kinda sorta know that he treated Betty's sister, Polly, pretty poorly while they were dating, but was it bad enough to push someone to murder him for it? That's difficult to say, but it certainly isn't out of the question. I feel like Archie and Miss Grundy can be ruled out, given how they were in the throes of a romantic picnic outing when they heard the gun go off nearby. So who does that leave us with? These are who I figure are the prime suspects...

When the police were looking for Jason's body at the start of the premiere, Betty's mom, Alice Cooper, could be heard whispering about how she hopes he "burns in hell" and thinks he deserves to suffer. We later learn that her hatred toward Jason stems from how poorly he treated Polly. And while that definitely earns her a placement on the suspect list, I'd say she's a little too obvious to be the actual killer. But hey, you never know.

Sure, Betty seems sweet enough for the most part, but let's not forget the build up of rage that flowed through her when Cheryl was giving her a hard time during cheerleading tryouts. Maybe all of that anger bubbled to the surface over the summer and Jason was just at the wrong place at the wrong time.

As our designated narrator of sorts, I feel like Jughead is unlikely the perp we're looking for, but then again maybe that's the genius part of it. You always assume the narrator can be trusted and is on the side of good. But what if this isn't the case at all? I mean, something definitely happened to tear Archie and Jughead's friendship apart. Maybe it's because he has a mean streak? (Again, this is just me thinking out loud.)

Then there's this interesting relationship to consider. I don't know what exactly the deal was between Cheryl and Jason, but the fact that she was with him during his final moments makes her potential guilt all the more prominent. Plus there's the fact that she insisted that her brother drowned when we now know he was shot in the head. If she has nothing to hide, then why lie about it?

Maybe the reason he was the one to discover Jason's body was because he knew where to look? Right now his kind demeanor screams innocence, but that's exactly why I'll be keeping my eye on him from here on out.

We haven't gotten to meet Polly yet, but I'm sure it's only a matter of time. And since she's the person who was arguably hurt by Jason the most (she has now been institutionalized by her mother, according to Betty), she would have the most to gain from his death. This could've been her shot (literally) at revenge.

Suffice to say, there's no way of know who exactly committed this crime. The show has only just started, so we need a little time before the theory wheel can really start churning. But as you can see, almost anyone could've done it. So until we're able to start ruling people out, do yourselves a favor and trust no one. You've been warned.