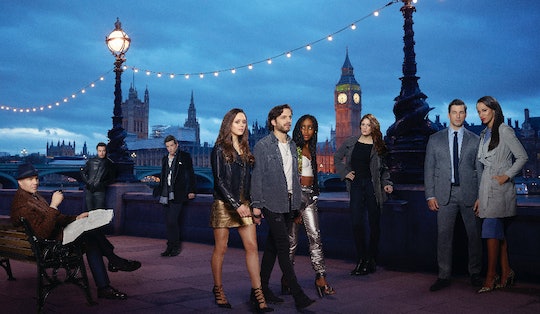 Who Killed Molly Ryan On 'Guilt'? More Than One Person Has Motive

We're only three episodes into Guilt, Freeform's newest mystery-drama summer series, but plenty of potential suspects have already emerged in the central whodunnit. The series kicked off with the grisly crime of Molly Ryan, who seems to have been mixed up in some really dark happenings while in London. Her roommate Grace is now mixed up in the thick of the murder scandal, which seems to surround her in every aspect of her life. Everyone in the show seems guilty, and the excess of potential murderers begs the question: Who killed Molly Ryan on Guilt?

The underlying theme of the show is that each of the main characters is guilty of something, whether it's murder, illicit sex, or just straight-up being a garbage human being. Because of that, several characters seem like they may have had plenty of motive to kill the young Irish student studying abroad in London. But how guilty are they? Not everyone can be the killer, but some certainly seem more likely than others. Of course, those theories evaporate each episode, but for now, here is who is on the suspect list.

Grace, our de facto protagonist, definitely has the super suspicious erratic behavior down pat. She's got a dark past, serious mood swings, and two potential motives for killing her friend and flatmate. First, she may have suspected that Molly and stepdad James were having a fling, which might have sent her over the edge. Alternatively, she may have known (or at least thought) that Molly and French boyfriend Luc were involved and decided to take Molly out of the equation.

As traumatic as it is to see beloved Watcher/librarian Giles from Buffy the Vampire Slayer as a skeezy seducer of college girls and potential murderer, James is looking all kinds of guilty. Natalie, who is by far the most reliably moral character of the bunch, was immediately suspicious of her stepfather. He apparently cheated on Grace and Natalie's mother repeatedly, before she died. Earlier in the season, he confessed to having a brief affair with the late Molly Ryan, and the latest episode "Exit Wounds" even revealed that she was blackmailing him for his involvement with Russian crime lords. These are all pretty straightforward motives for murder, in an effort to keep Molly quiet.

This guy is a grade-A creep. Sure, he may be royalty, but there is absolutely nothing charming about this prince. He's all smarm and manipulation. We first met Prince Theo at a lurid sex club – lurid in the sense that the women there seemed very uncomfortable and coerced into participating in Theo's rather violent sexual predilections. He was obsessed with Molly, even bemoaning the fact that one of the women he had sex with wasn't her. Most recently, we discovered that Theo thought he might have gotten Molly pregnant and that he is engaged to be married and that he's nervous enough about his relationship with Molly getting out that he's blackmailing a detective. All of this screams guilty. Also, the guy just weirds me out.

The adulterous professor was being a bit too cooperative before his untimely death to be considered a viable suspect. He gave a DNA sample willingly, though swore he never actually had a relationship with Molly. He did admit that he asked her out and she turned him down which could, theoretically, have given him motive to kill her. And there's still the matter of that former student who supposedly committed suicide after they broke off their affair.

She's by far the smartest character on the show. Roz really proved herself as a skilled manipulator when she masterminded that blackmail money pick-up on the bus, bringing in a group of rowdy Manchester fans to pretend to steal the money and phone and bring them back to her. She doesn't appear to have had any motive to have killed Molly (other than her general annoyance that Molly and Grace always invited random strangers over to their flat and made a mess), but we still have seven episodes to go. Plus, we already know that she's involved in a sketchy operation with dangerous, high-rolling sex club owners.

At this point, he seems less guilty than his other half, Grace, but I wouldn't be too surprised if Luc ends up being the murderer. We all saw him gladly accepting Molly's lapdance the night she died. If he'd accidentally impregnated her and then she'd threatened to tell Grace about it, he may have seen that as reason enough to kill her.

The professor's wife is almost too obvious a suspect. She became deeply unhinged once the police and press revealed to the world that her husband had repeatedly cheated on her, making her the laughing-stock of their community. She killed her husband and attempted to kill his former fling Grace as well, so she very well might have offed his other supposed mistress Molly (though Beatrice claimed not to know about a Molly/Professor Linley affair).