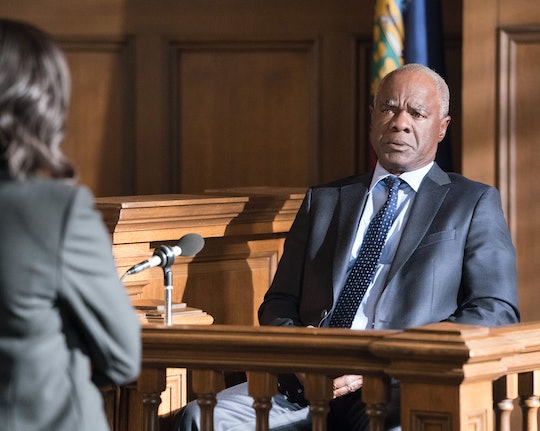 Here's What We Know About Nate Sr. On 'HTGAWM'

How To Get Away With Murder hasn't even approached the midseason finale yet and there are already unexpected murders to contend with. Besides the apparent death at Connor and Oliver's wedding being told through flashbacks built into every episode this season, Nate's dad was also murdered just moments before his surprise release after decades of imprisonment. So who killed Nate Sr. on HTGAWM? One suspect is heavily implied by the show, but that could always be a red herring. This is How To Get Away With Murder, after all, which means that just when you think you've got it all figured out — the show drops a bombshell.

That said, here is what I do know. Following her successful argument before the Supreme Court — a class action lawsuit for which Nate Leahy was her "face case" — Annalise Keating lands a job at upscale litigation firm Caplan & Gold, allowing her to continue her law clinic and keep working on her class action case. But when Governor Lynne Birkhead, a Republican whom Annalise frequently speaks out against, offers her a chance to work on the class action as part of the governor's office, Annalise is faced with a tough choice. She didn't really want to work for Caplan & Gold in the first place, and the job comes with some annoying strings attached. Governor Birkhead offers her a lot more freedom, plus meets basically all her demands, but Annalise is still on the fence about teaming up with the enemy.

Finally, she swings for the fences in a big way. Annalise tells Birkhead that she'll only work for the governor's office if Birkhead agrees to pardon Nate Leahy Sr., instead of having him committed to a psychiatric facility for the remainder of his life sentence. Birkhead is skeptical that she can make it happen. But when Annalise visits her office to let her know she'll be turning down the job offer to stay at Caplan & Gold, Birkhead comes through. Nate Sr. is scheduled to be released from prison on the same day Nate Jr. arranged for his expedited psych transfer.

Annalise takes the job with Birkhead and races to tell Nate the good news, but moments after she arrives, Nate receives a phone call that there had been "an incident" regarding his father. The next thing viewers saw was Nate's body with a gunshot wound to the head and a massive pool of blood. To really drive the point home, the episode ends with Governor Birkhead leaning back at her desk with an absolutely villainous smile on her face, strongly suggesting that she somehow played Annalise.

Of course, this is How To Get away With Murder, so plenty of people want to play Annalise. Could the prosecutor's office somehow be responsible as revenge for Annalise going over their heads and getting Leahy released? Could it be Caplan & Gold exacting revenge for her quitting her job at the firm? Is someone else trying to threaten or intimidate her out of moving forward with the class action lawsuit? Anything is possible with this very corrupt fictional justice system. But one thing is for certain: Governor Birkhead definitely did not have pure intentions in hiring Annalise, and she has firmly installed herself as this season's villain.