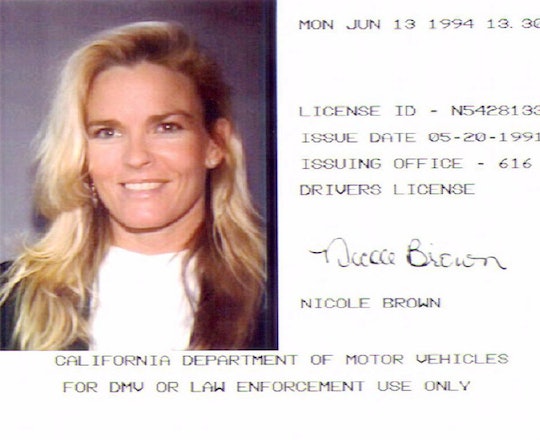 Who Killed Nicole Brown Simpson & Ronald Goldman? These Theories Have Attempted To Solve The Mystery

After Nicole Brown Simpson and Ronald Goldman were found murdered at her home in 1995, her ex-husband O.J. Simpson was arrested and put on trial for murder. Despite what was considered to be extensive evidence linking Simpson to the crime, there were also many doubts — largely surrounding alleged police interference in the crime scene as well as debates over racism, but also in the evidence itself, such as the blood-stained glove that reportedly didn’t fit Simpson’s hand when he tried it on during the trial. Simpson was ultimately acquitted in the extremely high-profile case, and since then, the case has remained unsolved. But, according to People, plenty of theories exist about who killed Nicole Brown Simpson and Ronald Goldman, and while none of them are currently under official investigation, now that the O.J. Simpson trial is back in the headlines (thanks to the upcoming FX series, American Crime Story: The People vs. O.J. Simpson), it seems only fair to revisit them.

The first — and most obvious — theory about who killed Nicole Brown Simpson and Ronald Goldman is that Simpson himself may have allegedly done it. According to the Washington Post, the majority of Americans today think that Simpson was responsible for the murder — although, similar to 1995, far more white Americans than black consider him guilty.

A September 2015 Washington Post/ABC News poll looking at the percentage of people who consider Simpson guilty 20 years after his acquittal showed that 83 percent of white Americans currently believed Simpson guilty (up from 63 percent in 1994), versus 57 percent of black Americans (up from 22 percent in 1994). Simpson himself, however, still maintains his innocence, and he is legally considered not guilty. Romper has reached out to Simpson’s legal team for comment and is awaiting a response.

As for the other prevailing theories? Here's what people have tried to argue.

Was It Simpson's Son?

One theory behind the murder of Simpson and Goldman is that the killer may not have been O.J. Simpson, but instead his son, Jason Simpson. Jason Simpson was never considered a suspect in the case of course, but according to People, this is the one theory that has received the most speculation in the press. That’s likely because the man behind the theory also happens to be, according to The Telegraph, “one of the planet's most decorated private eyes”.

76 year old Bill Dear is a former cop-turned-private-investigator, who insists that O.J. Simpson did not kill his ex-wife and Goldman, according to The Telegraph. Instead, he alleged, it may have been O.J.’s son from his first marriage, who Dear said struggled with a violent rage disorder that required antipsychotic medication. He alleged that Jason had a history of violence and assault, and that Jason’s own journal entries showed him allegedly claiming that he would reportedly “kill anyone who hurt his loved ones.”

Dear believed that Jason may have allegedly killed Nicole because she and her family had planned on dining at the restaurant in which Jason worked at the time, but that she had reportedly backed out at the last minute. As Dear told The Telegraph:

I don't believe that [Jason Simpson] had any intention of killing Nicole. He was embarrassed and in his psychiatric records it said he did not like women to lie to him. We know that just prior to that he nearly killed one of his former girlfriends, Jennifer Green, in a fit of rage. And we know that he carried [a] knife on his boot or on his belt, and he was always known to do that.

But critics have said that Dear’s theory may not even be partially credible. One particularly outspoken critic is former Village Voice editor Tony Ortega, who said that, while Dear’s story seems compelling, it shouldn’t be taken seriously. He noted, among other things, that Dear almost “completely avoids any discussion of the actual blood evidence at the scene,” and that he “discounts evidence of OJ's violent history, while overplaying and misdiagnosing Jason's own mental health history.” He also alleged that, according to Dear’s own account, the timeline of events is pretty hard to believe, writing in an April 2012 column,

Dear's timeline for that night is a complete farce. In 12 minutes, he has Jason committing the murders, calling his father, and then OJ coming down and observing the scene and returning home.

Either way, it’s very important to note that Jason Simpson has never actually been considered as a subject in the case, and despite Dear’s claims that he is guilty, so far it’s all just conjecture.

Was It A Drug Deal Gone Wrong?

Another person convinced of Simpson’s innocence is his former lawyer, F. Lee Bailey. According to the Huffington Post, in 2007 Bailey wrote a 20,000 word document entitled, “The Simpson Verdict,” where he alleged that Simpson’s defense team had four additional witnesses they were planning to call on who never ended up making it on the stand. These witnesses, Bailey wrote, further proved Simpson’s innocence, particularly one man, who Bailey said had claimed to have seen the people who killed Brown Simpson and Goldman.

In the document, which Bailey posted on his website in 2011, he alleged that the murder was essentially a case of mistaken identity: The night of the murder, two men out to collect on a drug debt allegedly arrived at Nicole’s house, where Bailey claimed they killed her and Goldman, unaware that the two were not the people they were looking for.

But attorney Gloria Allred, who represented Nicole Brown Simpson’s family during the trial, disagreed with Bailey’s take on what happened. Allred argued that if the evidence Bailey mentioned was so compelling, it would have been brought up — if not in the criminal trial, then certainly in the civil case that followed Simpson’s acquittal, where he was found liable and ordered to pay $33.5 million to the families of Brown and Goldman as a result.

Despite the theories that surround the O.J. Simpson case — a case which still intrigues the public after more than 20 years — it doesn’t seem like the identity of the killer will be known any time soon, if ever — and that has to be a difficult reality for the families of both Nicole Brown Simpson and Ronald Goldman, who will likely never truly feel like justice has been served.